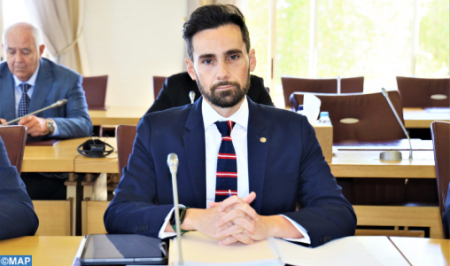 The Spanish Secretary of State for Security, Rafael Pérez Ruiz, underlined, Friday, Spain’s and Morocco’s commitment to continue strengthening bilateral cooperation on migration, describing it as an “example to follow.” “We are neighboring countries and strategic partners, and our daily work together has been an example, especially in the area of migration flows control and fighting human trafficking networks,” Rafael Pérez was quoted as saying in a statement issued by the Spanish Ministry of Interior following the meeting in Rabat of the Moroccan-Spanish Permanent Joint Migration Group. “We firmly believe that the best option to address this challenge is bilateral cooperation with the countries of origin and with those who share the same challenge,” he added. Pérez Ruiz highlighted the collaboration mechanisms that have proved their “operational effectiveness” in recent years, namely the joint sea, land and air patrols by the Guardia Civil and the Gendarmerie Royale, the exchange of information and police collaboration to dismantle human trafficking networks, and the establishment of police cooperation centers in Tangier and Algeciras. For his part, the Spanish Secretary of State for Migration, Jesus Perea Cortijo, stressed the need to continue supporting regular migration programs as a strategic objective for Spain and the European Union. The Spanish official highlighted the importance of training and integration in this area as well as the need to improve access routes for Moroccan students wishing to pursue their university studies in Spain. As for Spain’s Secretary of State for Foreign and Global Affairs, Angeles Moreno Bau, she voiced her satisfaction with the resumption of the permanent bilateral dialogue on migration. The meeting held in Rabat is the first tangible implementation of the joint declaration adopted during the visit of the President of the Spanish government, Pedro Sanchez, to Morocco on April 7, she said. The Moroccan-Spanish Permanent Joint Migration Group convened Friday in Rabat under the chairmanship of Khalid Zerouali, Wali Director of Migration and Border Surveillance at the Ministry of Interior and Jesus Perea Cortijo.