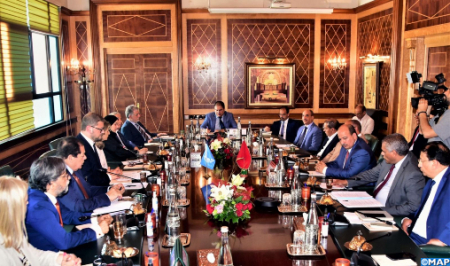 Speaker of the House of Advisors (upper house), Naama Mayara, held talks, on Monday in Rabat, with the President of the Parliamentary Assembly of the Mediterranean (PAM), Gennaro Migliore. The two sides had “important” discussions on ways to strengthen parliamentary cooperation between Mediterranean countries with a view to contributing to the well-being and prosperity of their peoples, through strengthening the foundations of coexistence and promoting peace and stability in the region, says a statement by the Upper House. Mr. Mayara welcomed the efforts made by PAM to promote dialogue and mutual understanding between Mediterranean countries and peoples who share the same values, stressing that the House of Advisors, as an active member of this parliamentary institution, seeks to further strengthen its partnership with this important grouping. Proud of its Mediterranean identity through its constitutional consecration and its several manifestations in the traditions and customs of the people, Morocco devotes its positive commitment to the Mediterranean area, at the level of the Union for the Mediterranean or the 5+ 5 Dialogue, he pointed out. The Kingdom, he said, also shows its constant concern for the issues facing this space, such as security, terrorism, organized crime, drug trafficking, illegal immigration, climate change, conflicts related to energy, food and health security challenges as well as the challenges of economic recovery in the face of the effects of the ِCovid-19 pandemic. For his part, Mr. Migliore, who is leading a large delegation on a working visit to the Kingdom, praised the important role played by the House of Advisors, as a major actor at the Parliamentary Assembly of the Mediterranean. He underlined PAM’s determination to organize some meetings on Moroccan territory, in particular those linked to the improvement of the living conditions of the peoples of the Mediterranean, referring to the Forum of the Euro-Mediterranean and Gulf region, which will be held next December and which will be an opportunity to deepen cooperation and increase efforts between these two geographical areas to meet common challenges, including the establishment of peace, security and stability in the region.  Migliore praised Morocco for its political stability, economic openness and religious tolerance, factors that make the Kingdom a major player in the region. Referring to the forthcoming organization in Morocco of a major international conference on interreligious dialogue, Mr. Migliore stressed that such occasions constitute a real bridge to deepen cooperation between the North and the South in order to overcome the constraints and problems related to terrorism and organized crime. On this occasion, the PAM President extended an official invitation to Mr. Mayara to participate in the important conference to be organized in Naples next June on this subject in cooperation with the United Nations Office on Drugs and Crime.