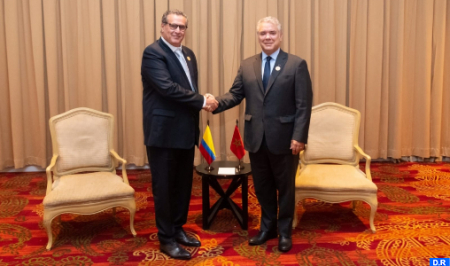 Colombian President Ivan Duque Marquez received, Sunday in San José, the Head of Government, Aziz Akhannouch. This audience took place following the inauguration ceremony of the new President of Costa Rica, Rodrigo Chaves, during which Mr. Akhannouch represented His Majesty King Mohammed VI. During this meeting, the Colombian President instructed the Head of Government to convey his feelings of esteem and consideration to HM the King, as well as his wishes for progress for the Kingdom of Morocco. President Duque underlined the importance he attaches to the development of economic relations and the strengthening of cooperation between the two countries. The Colombian President reiterated, on this occasion, his country’s support for Morocco’s stance on the Sahara issue, as well as for the Kingdom’s efforts to achieve a final solution to this artificial conflict, within the framework of the process conducted under the aegis of the United Nations. During this meeting, which took place in the presence of Morocco’s ambassador to Costa Rica with residence in Guatemala, Mr. Tarik Louajri, emphasis was placed on the importance of scheduling visits by delegations of businessmen of the two countries, with a view to further developing cooperation in the sectors of tourism, agriculture and investment.