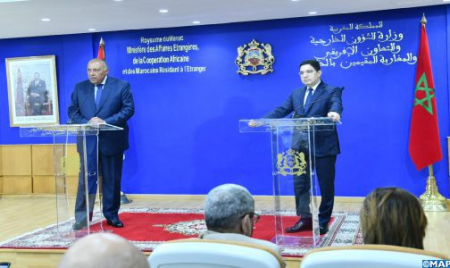 Egyptian Foreign Minister Sameh Choukri expressed, on Monday in Rabat, his country’s determination to activate the political consultation mechanism, the economic commission and the business forum with Morocco in order to further promote bilateral relations. During a joint press briefing following talks with the Minister of Foreign Affairs, African Cooperation and Moroccans Abroad, Nasser Bourita, the Egyptian official highlighted the “solid historical relations” between Morocco and Egypt and the ties binding the two Heads of State, HM King Mohammed VI and President Abdel Fattah Al-Sissi, and the two peoples, welcoming the convergence of views on several issues of common interest. He also stressed that contact and consultation have continued over the past two years between the two countries despite the context linked to the global health crisis, recalling in this regard the recent visits made by Mr. Bourita to Egypt. Coordination between the two countries is not limited to the bilateral framework, but is also evident within the framework of the Arab League, the African Union, the Organization of Islamic Cooperation (OIC) and at the Mediterranean level, the aim being to meet the common challenges within the framework of solidarity, he said, stressing the need to promote both relations between the legislative institutions of the two countries and cultural exchanges. The Egyptian minister underlined that his meeting with Mr. Bourita was an opportunity to discuss several issues of common interest in connection with Africa, in particular the Sahelo-Saharan region, developments in Libya, the Palestinian issue and the fight against terrorism, terrorist organizations and extremist ideology. In this regard, Mr. Choukri voiced the hope that the ministerial meeting of the Global Coalition against Daesh, scheduled for Wednesday in Marrakech, will be a success in the fight against this scourge. He also praised Morocco for the ongoing efforts made to face the repercussions of Covid-19, as well as to ensure development and promote the economy in order to meet the aspirations of the Moroccan people.