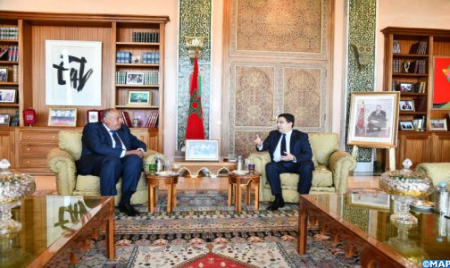 Minister of Foreign Affairs, African Cooperation and Moroccans Abroad, Nasser Bourita, on Monday called in Rabat for consolidating Moroccan-Egyptian coordination and undertaking joint initiatives serving the interests of both countries. “There is a convergence of views between Morocco and Egypt and a desire to strengthen bilateral coordination through joint initiatives serving the interests of both countries as well as regional security, peace and stability”, underlined Mr. Bourita, during a joint press briefing with his Egyptian counterpart Sameh Choukri, at the end of their talks. He has, in this regard, stressed that the two sides have agreed on the development of a bilateral cooperation agenda in several areas during the coming weeks and months, adding that this agenda will have to be concretized during high-level meetings between HM King Mohammed VI and President Abdel Fatah Al-Sissi. The minister said that the two parties agreed to translate this ambition of the two Heads of State into reality by taking advantage of the solid bilateral relations, while giving them a new impetus, through the activation of institutional mechanisms and the application of the agreements concluded, the holding of political consultation mechanisms, the consolidation of economic cooperation and the revitalization of the business council. Talks also focused on several regional issues in North Africa, such as the Libyan issue, in the Middle East, as well as in the African continent and the Euro-Mediterranean area, said Mr. Bourita. He also welcomed the special character of bilateral and centuries-old relations which have a political, economic, human and spiritual dimension. These are unique relations since they are governed by a distinguished legal and institutional framework, which has no equal in any other relationship of Morocco with an Arab or African country, said the minister. He also highlighted the special ties between HM the King and President Al-Sissi and the privileged partnership existing between the two countries, stressing that the Royal Instructions are clear as to the need for coordination and consultation with Egypt on international and regional issues at the Arab and African levels. The minister also expressed the strong condemnation by the Kingdom of Morocco of the terrorist attack that targeted the Sinai region, its total solidarity with the Arab Republic of Egypt and its support for the measures taken by the Egyptian authorities to preserve the country’s security and stability. He also expressed the condolences of the Kingdom to the families of the victims and its wishes for a speedy recovery to the injured. Mr. Bourita reiterated the Kingdom’s full solidarity with Egypt regarding its supreme interests and its fight against anything that could undermine its national and regional security, noting that Egypt’s security and stability are important for the Morocco and the Arab world.