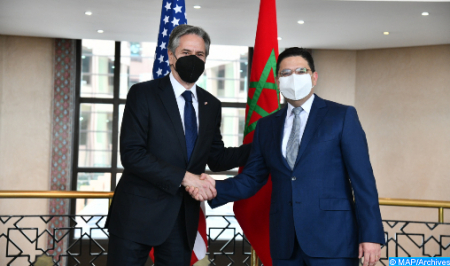 Minister of Foreign Affairs, African Cooperation and Moroccans Abroad, Mr. Nasser Bourita, had Tuesday a telephone conversation with the American Secretary of State, Mr. Antony Blinken. Blinken, who tested positive for Covid-19, expressed regret at not being able to participate in the ministerial meeting of the Global Coalition against Daesh. However, he announced that he will be represented at this meeting by the Under Secretary for Political Affairs, Victoria Nuland. Blinken thanked Morocco for hosting the ministerial meeting of the Global Coalition against Daesh. He also commended Morocco’s commitment to the fight against terrorism and the Kingdom’s role in promoting regional security and stability.