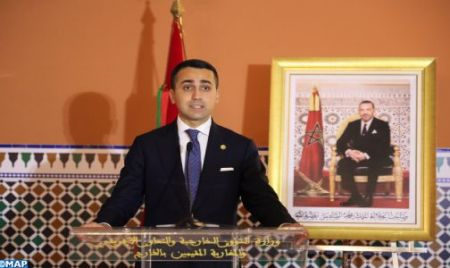 The Italian Minister of Foreign Affairs, Luigi Di Maio, affirmed, Wednesday in Marrakech, the importance of the role played by Morocco as a pole of democracy and stability in the Sahel and Mediterranean regions. “I wanted to stress the importance of the role played by Rabat as a pole of democracy and stability in the Sahel and Mediterranean regions, expanded through the reforms implemented by Morocco under the leadership of His Majesty King Mohammed VI,” said Di Maio in a statement to the press after his talks with Minister of Foreign Affairs, African Cooperation and Moroccans Abroad, Nasser Bourita. He also referred to the great dynamism of relations between Morocco and Italy and the excellent level of bilateral cooperation in all sectors, including politics, diplomacy, security and the fight against terrorism. Di Maio highlighted the great interest in maintaining and strengthening the legal framework that binds Morocco to the European Union, saying he was convinced that the Business Forum being finalized between Confindustria and the Moroccan Employers’ Association “will bring great benefits in terms of strengthening collaboration and integration between the two economic-productive systems to boost prosperity and cooperation in the Mediterranean”. “I reaffirmed with Minister Bourita the full support of Italy to the efforts of the UN Secretary General and his personal envoy Staffan de Mistura to pursue a fair, realistic, pragmatic, sustainable and mutually acceptable political solution to the Sahara issue,” he said about the issue of territorial integrity. The Italian diplomat also expressed his country’s willingness to “strengthen bilateral cooperation with the signing of the Action Plan for the implementation of the Multidimensional Strategic Partnership. On the subject of efforts to fight terrorism, the Italian official said that the meeting of the anti-Daesh coalition is an event of great political relevance in the fight against terrorism, recalling the commitment of Italy and Morocco in the stabilization of the Sahel and their close collaboration to promote the conditions of peace and development in the region.