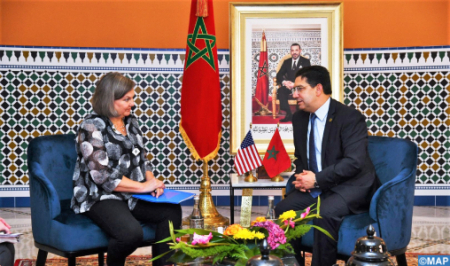 U.S. Undersecretary of State for Political Affairs Victoria Nuland stressed, Wednesday in Marrakech, the commitment of the Global Coalition to Defeat ISIS to ensure the lasting defeat of Daesh in Iraq and Syria, in Africa and worldwide. “We share common commitment to ensure the lasting defeat of Daesh in Iraq and Syria, on the African continent and around the world,” she said in an address at the opening of the Ministerial Meeting of the Global Coalition to Defeat ISIS. The action of the Coalition has ranged from the liberation of the Daesh-controlled territory in Iraq and Syria to the identification of areas that may be fertile grounds for terrorist groups, Nuland added. “In recent years, Deash has weakened considerably in Iraq and Syria but still remains a threat, seeking every opportunity to rebuild itself,” Nuland warned, calling for continued vigilance against the threat Daesh poses worldwide especially in Africa. According to Nuland, Daesh and other terrorist groups have increased their influence and capabilities in the Sahel, while the Al-Qaeda affiliated Nusrat al-Islam Group now threatens the coastal countries of West Africa. This first meeting of the Global Coalition to Defeat ISIS in Africa is being held at the joint invitation of the Minister of Foreign Affairs, African Cooperation and Moroccans Abroad and the head of U.S. diplomacy, Antony Blinken. The meeting, which sees the participation of representatives from more than 80 countries and international organizations, focuses on the challenges posed by terrorism in all its forms and the repositioning of Daesh in Africa. The hosting by Morocco of this international event reflects the confidence enjoyed by the singular approach implemented by the Kingdom under the enlightened leadership of HM King Mohammed VI in the fight against terrorism.