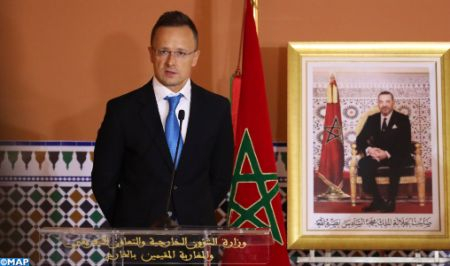 Hungary’s Foreign Minister Péter Szijjártó praised, on Wednesday in Marrakech, Morocco’s efforts to ensure stability in Africa and in the region. Morocco and Hungary share the same views on many issues, including the fight against terrorism, the head of Hungarian diplomacy said during talks with the Minister of Foreign Affairs, African Cooperation and Moroccans Abroad, Nasser Bourita. Praising the Kingdom’s efforts in the fight against terrorism, which helped promote stability in Africa and the European Union countries, Szijjártó stressed that the sovereign policy of Morocco enjoys the esteem of Hungary, which supports Morocco in all its initiatives. Hungary has always defended the interests of Morocco within the EU, he added. In a joint political statement between Rabat and Budapest, Hungary had expressed its support for Morocco’s autonomy initiative, submitted to the UN Secretary-General on April 11, 2007.