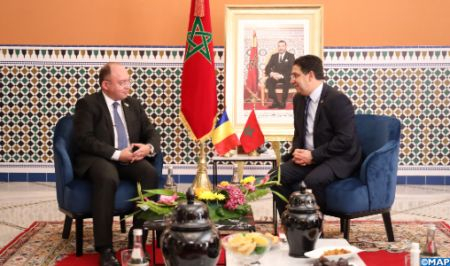 Romania reiterated, Wednesday in Marrakech, its support to the autonomy initiative presented in 2007 by Morocco as a “serious” and “credible” basis for the resolution of the artificial conflict over the Moroccan Sahara. Romania reaffirms its support for the efforts carried out under the exclusive auspices of the United Nations, with a view to reaching a just, lasting and mutually acceptable political solution to the Sahara issue, based on the concept of compromise, in accordance with the resolutions of the United Nations Security Council, said a joint statement issued after talks, Wednesday in Marrakech, between Minister of Foreign Affairs, African Cooperation and Moroccans Abroad Nasser Bourita, and Minister of Foreign Affairs of Romania, Bogdan Aurescu. Bourita and Aurescu expressed their determination to maintain a continuous dialogue in favor of renewed multilateralism and agreed to undertake concerted actions within the United Nations for peace and international security. Bourita and Aurescu stressed the positive and constructive role of Morocco and Romania in maintaining stability, security and peace in their respective regions, being aware of the role and responsibility that dictate the geographical positions of the two countries to promote peace and harmony in Africa, the Mediterranean and Central Europe and Balkan. They also agreed to consolidate their bilateral relations to build a deep partnership, through the intensification of political dialogue, the establishment of a renewed economic cooperation framework, as well as the implementation of a revisited cooperation in education, training, scientific research and innovation, digital and cultural action. This partnership will be further strengthened by the mobilization of non-governmental actors, such as those in charge of decentralized cooperation for territorial development and increased links between business communities.