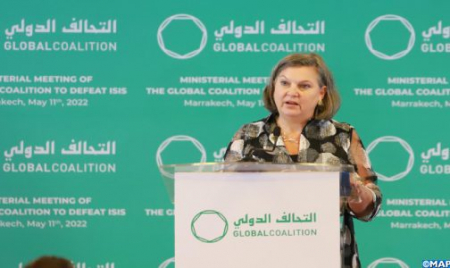 U.S. Under Secretary of State for Political Affairs, Victoria Nuland, said, Wednesday in Marrakech, that the Ministerial Meeting of the Global Coalition to Defeat ISIS was “very fruitful” and demonstrates “our joint efforts to defeat this terrorist organization”. The Marrakech meeting “was very fruitful and demonstrated our joint efforts to defeat this terrorist organization, ensure the security and stability of fragile states and protect human lives,” said the American diplomat during a joint press briefing with Minister of Foreign Affairs, African Cooperation and Moroccans Abroad, Nasser Bourita, at the end of this international meeting, which was attended by 79 countries. The convening of this first meeting of the Global Coalition to Defeat ISIS in Africa shows a change of orientation with regard to the threat of ISIS and the challenges posed by the presence of this terrorist organization on the African continent,” she pointed out. “Our presence today alongside the representatives of 13 African countries is strong proof and a clear signal to this terrorist organization that we will remain united to defeat it”, said the American official, reaffirming “the commitment of the United States and the other members of the Coalition to support our partners in their efforts to strengthen their security and achieve greater justice for the peoples of the continent”. In this regard, she recalled that the United States has mobilized significant financial support this year to back these efforts, expressing her government’s pride in “carrying out this action in cooperation with the Kingdom of Morocco”. The Marrakech meeting was an opportunity to discuss joint action to fight against terrorism in all its forms, as well as measures to strengthen the security strategies and capacities of the countries of the continent, with a view to defeating this terrorist organization. Morocco’s hosting of this international event shows the confidence enjoyed by the unique approach implemented by the Kingdom under the enlightened leadership of HM King Mohammed VI in the fight against terrorism. The meeting also confirms Morocco’s strong determination to closely coordinate with its partners to eradicate the threat posed by ISIS.