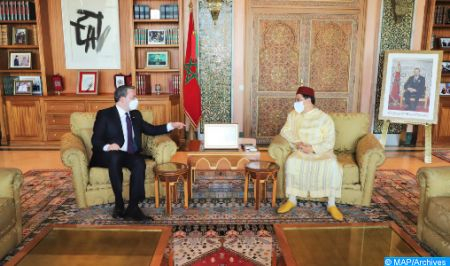 Serbia welcomed, on Wednesday, Morocco’s role as a regional pole of stability and as a relay of growth and development in Africa. “Serbia welcomes the role of Morocco as a regional pole of stability and as a relay of growth and development in Africa,” said a joint statement issued following talks between Minister of Foreign Affairs, African Cooperation and Moroccans abroad, Nasser Bourita, and his Serbian counterpart Nikola Selaković, on the sidelines of the Ministerial Meeting of the Global Coalition to Defeat ISIS, held in Marrakech. On this occasion, Morocco and Serbia underlined their positive and constructive role in maintaining stability, security and peace in their respective regions. The two countries noted their commitment to these principles, as well as to a peaceful resolution of conflicts and respect for the territorial integrity and sovereignty of States, the statement added. Serbia’s top diplomat praised the far-reaching reforms undertaken during the last two decades under the Leadership of HM King Mohammed VI and the renewed efforts for the political, economic and social development. He also praised Morocco’s New Development Model of Morocco and the promotion of advanced regionalization. Mr. Bourita and Mr. Selaković welcomed the positive dynamics of the political relations between the Kingdom of Morocco and the Republic of Serbia in the wake of the celebration, this year, of the 65th anniversary of the establishment of diplomatic relations between the two countries. They also welcomed the willingness expressed by both sides to put cooperation between the two countries on the path of a strategic partnership. The two ministers stressed the importance of giving a strong impetus to the economic cooperation by organizing, during this year, the 3rd session of the Joint Economic Commission in Belgrade, the joint statement concluded.