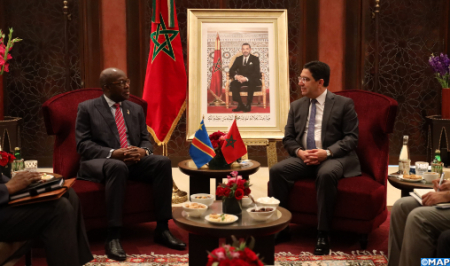 The Deputy Prime Minister, Minister of Foreign Affairs of the Democratic Republic of Congo (DRC) Christophe Lutundula Apala Pen’Apala welcomed, Thursday in Marrakech, Morocco’s commitment towards Africa in terms of combating terrorism, under the enlightened leadership of HM King Mohammed VI. In a joint statement issued following his talks with the Minister of Foreign Affairs, African Cooperation and Moroccans Abroad, Nasser Bourita on the sidelines of the Ministerial Meeting of the Global Coalition to Defeat ISIS, Apala Pen’Apala welcomed the Kingdom’s commitment towards Africa in terms of promoting a comprehensive and inclusive approach in the fight against terrorism, based on security and development. This meeting reflects the solidity and closeness of the historic ties of friendship and solidarity between Morocco and the DRC. It also mirrors the interest of the two brotherly countries in the continuous development of their multifaceted cooperation, in accordance with the High Directions of His Majesty the King and His Excellency President Félix Antoine Tshisekedi Tshilombo, President of the Democratic Republic of Congo. During their meeting, the two parties welcomed the perfect concordance of views of their respective governments on various bilateral, regional and international issues of common interest, highlighting the efforts made by the two countries and the international community in the field of the fight against terrorism.