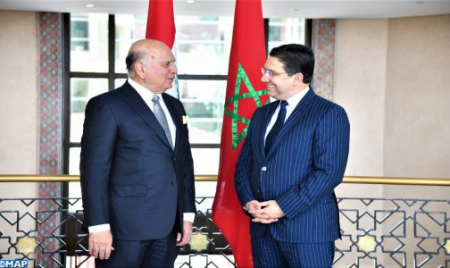 The Foreign Ministers of the Kingdom of Morocco and the Republic of Iraq called on Friday to increase efforts to further develop cooperation between the two countries, in order to reflect the great potential they have and respond to the aspirations of the two brotherly peoples. Within the framework of the privileged relations of fraternity and the solid ties binding the Kingdom of Morocco and the Republic of Iraq, the two ministers underlined the sincere will of the two countries to promote their relations in various areas, says a joint statement issued at the end of the talks held in Rabat between the Minister of Foreign Affairs, African Cooperation and Moroccans Abroad, Nasser Bourita, and his Iraqi counterpart, Fouad Hussein, on the sidelines of the Ministerial Meeting of the Global Coalition to Defeat ISIS. In this regard, the two officials urged the businessmen of the two countries to seize the important business opportunities and the potential offered with a view to developing economic and trade relations, based on the legal framework existing both at the bilateral level and within the framework of the Arab League conventions, calling for the modernization of this legal framework to match it with the new dynamics of bilateral relations. The two ministers, who highlighted the determination of the two countries to convene the joint commission and to develop this mechanism according to a common approach based on realism and solidarity, underlined the need to put in place a memorandum of understanding relating to political consultation, which will be signed during Mr. Bourita’s next visit to the Republic of Iraq, and activate political consultation between the two countries to coordinate positions in order to serve common interests. During these talks, the joint statement adds, the two ministers discussed regional and international issues, stressing the commitment of the two countries to the security, stability and territorial integrity of the Arab region, national constants, respect for the sovereignty of its States, as well as the rejection of any foreign interference in their affairs. On another aspect, Mr. Bourita congratulated his Iraqi counterpart for the success of the legislative elections of October 12, 2021, the conduct and transparency of which were hailed at the international level. He also renewed his congratulations to Iraq for defeating terrorism and liberating its territory from the terrorist organization ISIS. In this regard, Mr. Bourita expressed Morocco’s support for Iraq to meet security challenges and preserve its security, sovereignty, stability and territorial integrity. The Iraqi top diplomat is on a visit to Morocco during which he took part in the Ministerial Meeting of the Global Coalition to Defeat ISIS, organized on May 11 in Marrakech.