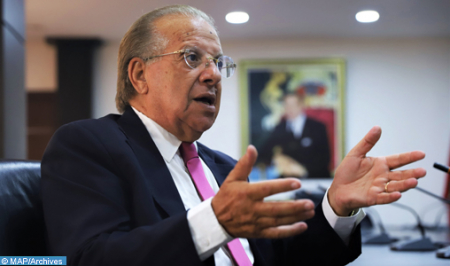 The ministerial meeting of the Global Coalition to Defeat ISIS, held last Wednesday in Marrakech with the participation of representatives of more than 80 countries and international organizations, was a “success” for both Moroccan diplomacy and the Coalition, according to political expert and academic Mustapha Sehimi. In an opinion piece, Sehimi said the Marrakech Conference represented “another success” for the Kingdom on the national question. This issue “was not formally on the agenda of this meeting, but it could not be ignored because of the persistence of an artificial conflict maintained by the neighboring country to the east that hosts, finances and arms the separatist movement. The link with the fight against terrorism and its many activities in the region and the continent is structural,” he explained. At the same time, added Sehimi, the vast majority of the international community measures and appreciates the Moroccan position formulated on April 11, 2007 before the Security Council, adding that the fact that the Marrakech Conference took place, in person, “allowed direct contacts and consultations of Minister of Foreign Affairs, Nasser Bourita, with dozens of his counterparts from the countries present». This led to a “real” diplomatic support for the Moroccan autonomy plan. Thus, in the space of a single day, Wednesday, May 11, the heads of diplomacy have reiterated their respective positions on the Moroccan Sahara. They include: Romania, the Netherlands, Serbia, Bahrain, Niger, Guinea, Central Africa and Saudi Arabia. A special mention should be made to Egypt, as it was reaffirmed during the visit of the Minister of Foreign Affairs, Samih Choukri, on May 9-10,” added the political expert.