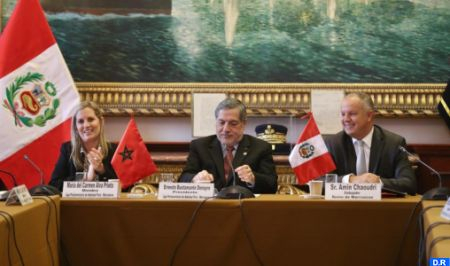 President of the Peruvian Congress and member of the Peru-Morocco parliamentary friendship group, Maria del Carmen Alva Prieto, welcomed the excellent level of legislative relations between the two countries, on the occasion of the first meeting of this friendship group. A statement by the Embassy of Morocco in Lima said that this first meeting took place last Friday at the headquarters of the Peruvian legislative institution, in the presence of the group’s chairman, Ernesto Bustamante Donayre, who is also chairman of the Foreign Affairs Committee of Congress, as well as members of this friendship group where are represented the different political formations of the Andean country. Maria del Carmen Alva Prieto took this opportunity to call on the members of the parliamentary group to further strengthen the bonds of friendship between Morocco and Peru and to promote the exchange of information and experiences, as well as dialogue, parliamentary cooperation and consultation on issues of common interest. Alva Prieto, who highlighted the need to consolidate bilateral relations with the Kingdom, noted that the Peruvian Congress was “aware of the erroneous decision taken by the government of Pedro Castillo who has restored relations with a non-existent republic,” while stressing that “the Ministry of Foreign Relations of Peru should retract,” the same source noted. For his part, Bustamante Donayre reiterated the position of Congress in favor of “autonomy plan and sovereignty of the Kingdom over the entire Moroccan Sahara,” hoping for a “formal recognition of the Peruvian government of the Moroccan plan, the only solution to the regional dispute over the Sahara, especially in the current international context”. He highlighted the victory of Moroccan diplomacy in defending the territorial integrity of Morocco, as well as the growing international support for the autonomy plan, citing the new positions of the Netherlands, Romania, the Republic of Cyprus, Spain, Germany and the majority of member countries of the UN. In addition, the Peruvian deputy praised the good management of the Kingdom of the Covid-19 crisis and praised the major development projects launched, especially in the southern provinces, where he made an official visit last March leading a parliamentary delegation. In the same sense, he highlighted the achievements in the sectors of renewable energy, infrastructure, industry and agriculture, while stressing the importance of further promoting trade and economic exchanges, with a view to signing a free trade agreement between the two countries. The president of the parliamentary friendship group stressed that the role of this friendship group and the Congress in general, is to exercise political control over the government, in order to improve and safeguard the good relations with Morocco. The other members of the Peru-Morocco parliamentary friendship group deplored the decision to recognize an “imaginary and self-proclaimed republic”, considering it an offense to the government and people of Morocco. In addition, they expressed their willingness to work actively through parliamentary diplomacy to safeguard the good relations of friendship between the two countries and implement the work agenda unanimously approved in this session. For his part, the Moroccan ambassador to Peru, Amine Chaoudri, highlighted the success of the recent visit of the Peruvian Congress delegation to the Kingdom which testifies to the strength of relations between the legislative institutions of the two countries. The Moroccan diplomat also listed the assets offered by Morocco which stands out as an important economic hub and a privileged gateway for Peru in Africa.