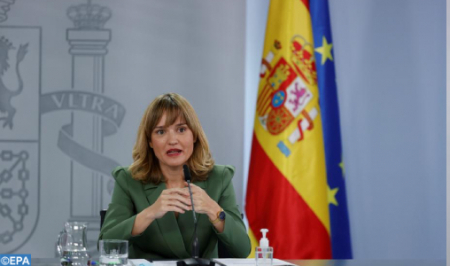 Spanish Minister of Education and Vocational Training, Pilar Alegría, stressed, Thursday, the crucial importance of building “stable and trustworthy” relations with Morocco. “Maintaining stable and trustworthy relations with Morocco is essential” for Spain, said Alegria in an interview with radio “Cadena Ser.” The minister assured that diplomatic relations with Morocco are “strategic”, stressing the important role played by Morocco in the fight against illegal migration and terrorism. Morocco is a “strategic” partner for Spain in the areas of economics, migration and counter-terrorism, she stated. The minister defended her country’s position on the Moroccan Sahara issue, under which Madrid sees the Moroccan autonomy initiative as “the most serious, realistic and credible basis” for the resolution of this artificial dispute. This is a “courageous” decision to help resolve this dispute, the official added, stressing that the populations living in the Tindouf camps are the first victims of the status quo that has lasted for 46 years.