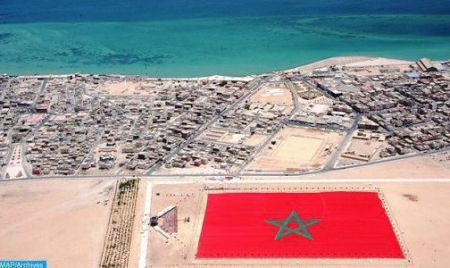 The Consulate General of Morocco in Bordeaux held on Wednesday a conference to promote the second edition of the book “The Moroccan Sahara” by French professor and lawyer Hubert Seillan. This event, moderated by Morocco’s Consul General in Bordeaux, Ahmed Nouri Salimi, was an opportunity to showcase the recent important diplomatic achievements made by Morocco, under the leadership of HM King Mohammed VI, to reach a final solution to the artificial conflict over the Moroccan Sahara, the consulate said in a statement. In his book, Seillan outlined the historical and political contours of the Sahara issue, stressing the growing international support enjoyed by Morocco’s autonomy plan, thanks to the Kingdom’s proactive, forward-looking and realistic diplomacy, the same source added. The author also highlighted the latest developments of the Moroccan Sahara issue in a regional and international context marked by major economic, political and security challenges. The representatives of the consular corps accredited to Bordeaux who attended the event were keen to affirm their support for the Moroccanness of the Sahara and the rightness of the national cause, the statement concluded.