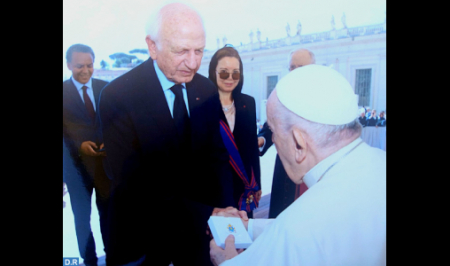 “The spiritual leadership and prayers of HM King Mohammed VI, Commander of the Faithful, are precious to us,” said His Holiness Pope Francis on Wednesday upon receiving HM the King’s advisor, Andre Azoulay, who came to greet the Supreme Pontiff in St. Peter’s Square in the Vatican city. Azoulay, who was accompanied by Rajae Naji El Mekkaoui, Morocco’s ambassador to the Holy See, and Professor Abdellah Ouzitane, president of the Center for Studies and Research on Hebrew Law in Bayt Dakira, conveyed to HH Pope Francis the fraternal and profoundly friendly greetings of His Majesty King Mohammed VI, recalling the historic resonance of Pope Francis’ visit to Morocco in March 2019. “The visit is marked with the seal of exception and its memories remain vivid in the heart and memory of all Moroccans,” said Azoulay, who is in Rome to participate alongside the head of the Vatican government, Archbishop Pietro Parolin, in the symposium held by Morocco’s Embassy to the Holy See at the Pontifical University to discuss “The Common Word and the Spirituality of action.”