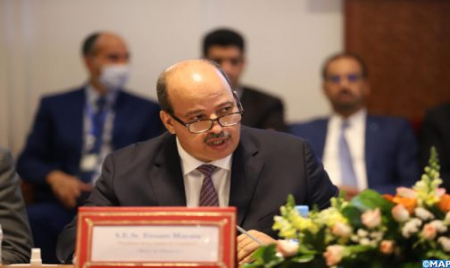 The challenges on the international agenda, especially in the South, require building strong national states that can be the pillars of regional and international stability, said Thursday in Rabat, Speaker of the House of Advisors (upper house), Naama Mayara. Speaking at the opening of the 26th Extraordinary Session of the Forum of Presidents of the Legislative Powers of Central America, the Caribbean Basin, and Mexico (FOPREL), Mayara said that the bilateral and multilateral institutional mechanisms and spaces established jointly by the Moroccan Parliament and those of Central America and the Caribbean “will be useless if we do not pay attention and sound the alarm on the looming threats for countries, namely the attempts to partition the States in order to undermine their unity and territorial integrity and to fuel separatist tendencies, especially when these are combined with terrorism, arms trafficking and human trafficking. “We aspire that the FOPREL forum will be a mechanism for advocacy and for the peoples of Africa, Central America, the Caribbean, and Mexico on issues of peace, health, social and environmental justice, sustainable development, global democratic governance, and the rule of law and human rights,” he added. In Mayara’s opinion, the theme chosen for the session, namely South-South cooperation between the countries of Africa, Central America, the Caribbean and Mexico and Morocco’s pioneering experience in the fields of migration and renewable energy show that this regional parliamentary organization emphasizes the strategic importance that Morocco attaches to South-South cooperation, under the leadership of His Majesty King Mohammed VI. The Moroccan Parliament hosts until May 21, the 26th Extraordinary Session of the FOPREL. The session provides an opportunity to highlight the Moroccan experience in the fields of migration and renewable energy, the same source added, noting that the session will conclude with the reading and ratification of several draft resolutions on the agenda. On the sidelines of the session, the presidents of the legislative powers and parliamentary delegations representing Central America, the Caribbean Basin and Mexico will hold a series of meetings with Moroccan officials.