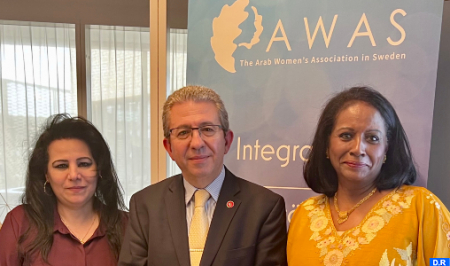 Morocco’s migration policy and the High Royal Solicitude towards Moroccans around the world were highlighted during a meeting organized recently in Stockholm, by the Union of Arab Women in Sweden. This meeting, which was attended by representatives of civil society and religious circles in Sweden, has highlighted the efforts of the Kingdom in the field of migration and its strategy towards Moroccans living abroad to integrate them into host societies while maintaining a strong attachment to the country of origin. In this regard, the Moroccan ambassador to Sweden, Karim Medrek stressed that the assimilation and social integration of immigrants are processes as complex and varied as the societies concerned by international migration flows are themselves. He explained that the immigrant and his family are faced with the challenge of preserving their culture and the precepts of their religion within their new societies, pleading for the establishment of a strategy based on a holistic approach in the framework of partnerships with the various stakeholders to help these migrant families to overcome such difficulties. Faced with such constraints, he said, the educational and cultural needs have emerged as a priority and a necessity to which urgent and adequate responses should be provided. Medrek said that acculturation is linked to economic adaptation, social integration, the satisfaction of aspirations and the degree of identification with the country of adoption. That is why, he said, we should beware of any generalization, because despite all these difficulties, the majority of immigrant families have managed to integrate into the host countries, taking control of their affairs, and participating, moreover, fully in the socio-economic development of their host country, while preserving an unbreakable link with their country of origin. The Moroccan diplomat further highlighted the dynamism of the Moroccan community abroad which constitutes an example of integration in the host societies. He also highlighted the growing role of Moroccans abroad in the development dynamics of the Kingdom, stressing the High Royal Solicitude towards this community and the tireless efforts of the Sovereign to defend its interests and preserve its achievements. Morocco also pays special attention to foreign immigrants on its territory, said the ambassador, recalling that in light of the transformations it has experienced over the past two decades, the Kingdom has become a land of immigration par excellence and a country of reception and residence, rather than transit of migrants. For her part, Swedish researcher Sonia Sherefay, specialist in integration issues and cultural conflicts, reviewed the problems that affect parents and children in Sweden, explaining that her experience in the field of education and integration of immigrant families has allowed her to better understand the mechanisms of the migration process, the education of children in the new country and life in a new society. She explained that her work aims, essentially, to provide immigrant families with tools to deal with the conflicts that often arise in the relationships between children, parents, school personnel and others, as well as to create and promote new forms of understanding and dialogue between all these stakeholders.