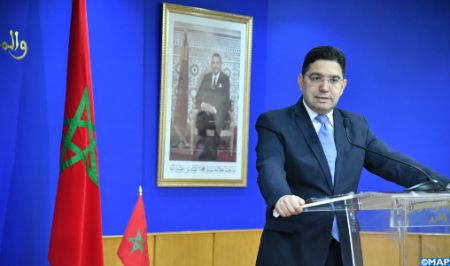 The city of Dakhla will host, before the end of the year, the Morocco-Caribbean Community (CARICOM) forum, Nasser Bourita, Minister of Foreign Affairs, African Cooperation and Moroccans Abroad, announced on Wednesday in Rabat. This forum, which will bring together Morocco and the 14 countries of CARICOM, will be a framework for exchange on areas of regional cooperation and strengthening coordination between these countries, said Bourita at a joint press briefing with the Minister of Foreign Affairs, Trade and International Cooperation of Suriname, Albert Ramdin. Morocco is proud to see the Republic of Suriname chairing CARICOM as of next July, Morocco’s FM said, expressing hope that Suriname’s presidency of this forum will mark a new level of cooperation between Morocco and the regional grouping. The opening Thursday in Dakhla of a Consulate General of Suriname, which reflects Paramaribo’s constant position on the territorial integrity of the Kingdom, is part of the important momentum in relations between Morocco and the countries of the Caribbean. Until 2009, all the 14 countries of the Caribbean recognized the so-called republic, except for the Bahamas which supported the territorial integrity of the Kingdom, Bourita recalled. Today, 12 countries out of 14 have changed their position in favor of Morocco’s territorial integrity and sovereignty over its southern provinces, thanks to the High Instructions of HM King Mohammed VI which stressed the imperative to strengthen cooperation with the Caribbean States and called for mobilizing all national mechanisms of South-South cooperation. All the elements are now combined to create a strong partnership between Morocco and all the Caribbean countries in the framework of CARICOM, Bourita concluded.