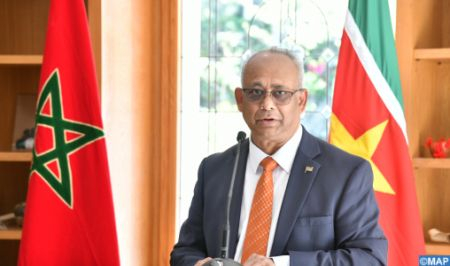 The Minister of Foreign Affairs, International Business and International Cooperation of Suriname, Albert Ramdin, said, Wednesday in Rabat, that his country fully supports the hosting by the city of Dakhla of the Morocco-Caribbean Community (CARICOM) Forum before the end of the year. “This is an important initiative, Morocco being the gateway to Africa,” said Ramdin at a joint press briefing with Minister of Foreign Affairs, African Cooperation and Moroccans Abroad, Nasser Bourita, following bilateral talks. Surinamese FM praised the pioneering role of HM King Mohammed VI in promoting South-South cooperation and solidarity between countries, especially in Africa and the Caribbean. Relations between Morocco and the Republic of Suriname have recorded a remarkable development and have always been based on firm commitments and a concrete will, he said. “I think we have paved the way for a solid relationship based on friendship and respect with a view to consolidating ties between the Republic of Suriname and the Kingdom of Morocco and exploiting all possible opportunities,” Ramdin added. He also invited his Moroccan counterpart to visit Suriname as part of the reinforcement of bilateral cooperation and the completion of a number of bilateral agreements. This visit, he assured, will help strengthen bilateral relations and explore new areas of partnership between the two countries. Earlier on the day, Bourita announced that the city of Dakhla will host, before the end of the year, the Morocco-CARICOM Forum. This Forum, which will bring together Morocco and the 14 countries of CARICOM, will be a framework for exchange on areas of regional cooperation and strengthening coordination between these countries.