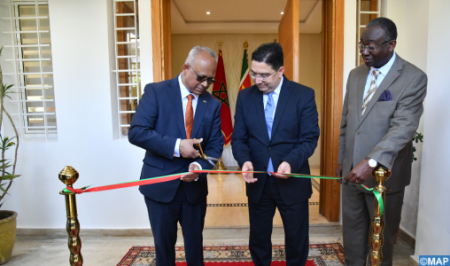 The Embassy of the Republic of Suriname in Morocco was inaugurated during a ceremony chaired Wednesday in Rabat by the Minister of Foreign Affairs, African Cooperation and Moroccans Abroad, Nasser Bourita, and the Surinamese Minister of Foreign Affairs, Trade and International Cooperation, Albert Ramdin. On this occasion, Ramdin said that the opening of the Embassy and the upcoming opening of a Consulate General in the city of Dakhla on Thursday, will further strengthen relations between the two countries and raise them to a higher level. These relations are based on respect for the sovereignty of Morocco over its Sahara and commitment to democracy and the promotion of human rights, among others, he said. For his part, Bourita said that the opening of the Embassy of Suriname in Morocco is part of the momentum of relations between the two countries over the past seven years. The position of Suriname in favor of the national cause has paved the way for developing bilateral relations, thus allowing to establish mechanisms to continue the implementation of the bilateral cooperation roadmap and achieve the agreed upon projects, the minister added. Rabat is now an important diplomatic platform at the regional and international levels thanks to the confidence that the Kingdom inspires as a partner and which makes it a diplomatic center experiencing a real dynamic, in line with the vision of His Majesty King Mohammed VI, Bourita said. Morocco and Suriname expressed on Wednesday their great appreciation of the present level of bilateral relations in all areas, in a joint statement issued following talks between Nasser Bourita and Albert Ramdin. During these talks, the two ministers discussed a broad range of issues relating to the status and prospects for expanding cooperation between Morocco and Suriname to match the respective aspirations and ambitions of both countries.