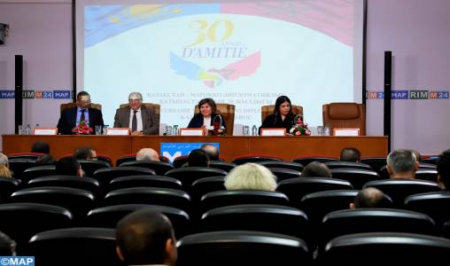 A diplomatic forum celebrating the 30th anniversary of the establishment of diplomatic relations between Morocco and Kazakhstan Took place Thursday at the headquarters of Morocco’s news agency (MAP) in Rabat, in the presence of a host of Moroccan and foreign personalities. This celebration was complemented by a photo exhibition and the screening of a film showcasing the momentum experienced by Kazakhstan in various fields. The event was an opportunity to highlight the dynamism marking the relations of friendship and cooperation between the two countries. In a speech, Kazakh Ambassador to Morocco, Saulekul Sailaukyzy, pointed out that the Kingdom was among the first countries to recognize the independence of Kazakhstan. This celebration is an opportunity “to give our trade and economic relations a new impetus to raise them to the level of our privileged political relations,” she added. The opening to foreign markets and the economic potential of Morocco and Kazakhstan offer new opportunities for efficient cooperation, she pointed out. The diplomat also noted that the holding this year of the 4th session of the Morocco-Kazakhstan political consultations will give a new impetus to the relations of partnership and cooperation between the two countries by consolidating them in accordance with the political agenda. For his part, Abdelkader El Ansari, Asia and Oceania Director at the Ministry of Foreign Affairs, African Cooperation and Moroccans Abroad, said that this celebration “testifies to how old our bilateral relations are.” “Morocco was among the first countries to recognize and establish diplomatic relations with Kazakhstan in 1972. Since then, our relations have always been marked by mutual respect, friendship and solidarity,” he noted. Morocco sees Kazakhstan as an important partner in the Central Asian region, said, for his part, Abdeljalil Saubry, Morocco’s first Ambassador to Kazakhstan, highlighting several areas are of particular importance to both countries including agriculture, renewable energy, tourism and trade, among others. Diplomatic relations between the Kingdom of Morocco and the Republic of Kazakhstan were established in 1992. An embassy of Kazakhstan in Morocco was opened on December 30, 2020.