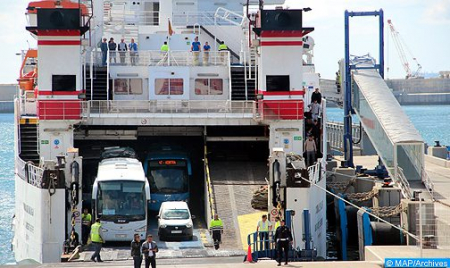 The Marhaba Operation is a unique model of bilateral and regional coordination between Morocco and several countries, said Monday in Rabat the Minister of Foreign Affairs, African Cooperation and Moroccans Abroad, Nasser Bourita. Speaking at the House of Representatives (lower house), Mr. Bourita stressed that all the actors concerned are mobilized in order to facilitate administrative procedures at transit points and improve services on board ships and planes as well as at the level of the roads used by the Moroccan community abroad, adding that the Marhaba Operation is a model of good cooperation between Morocco and Spain. “This operation testifies to the unwavering attachment of Moroccans living abroad to their Homeland, because it allows nearly three million Moroccan nationals to return to the country each year to visit their relatives”, he underlined. The Marhaba Operation, he added, constitutes “a unique logistical, organizational and security challenge at the level of Europe, Africa and the Mediterranean”, noting that this is also a peak period for consular work which requires strengthening the human, material and organizational resources of the Kingdom’s consular network. The Marhaba Operation also represents an important economic challenge given its contribution to the promotion of the tourism and hotel sectors and to the economic fabric in general, not only in Morocco, but also in all transit countries, noted the Minister. In this regard, Mr. Bourita pointed out that the 2022 Marhaba Operation takes place in a particular context, given that it is the first of its kind to be conducted after the significant improvement in the health situation linked to the Covid-19 pandemic, and after two years of limited transit due to pandemic-related restrictive measures. This year’s Operation also coincides with the implementation of the roadmap announced in the Moroccan-Spanish Joint Declaration following talks between His Majesty King Mohammed VI and the President of the Spanish Government on April 07, 2022, and which opened a new stage in the Moroccan-Spanish partnership, while emphasizing the resumption of maritime links for travelers and the launch of joint preparations for the Marhaba Operation.