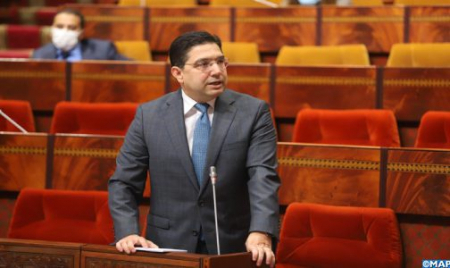 Minister of Foreign Affairs, African Cooperation and Moroccans abroad, Nasser Bourita, stressed Monday in Rabat that his department is committed, alongside the authorities, government stakeholders and other parties, to meet the conditions necessary for the success of the operation of receiving Moroccan expatriates Marhaba 2022. Speaking at the weekly session of oral questions at the House of Representatives, Bourita said the operation is being supervised in an intensified manner throughout the week, on arrival and return, with an average of 35,000 people and 4,500 vehicles per day. This number reaches up to 66,000 people per week during the high season, which requires the intervention of many stakeholders, the Minister said in response to a question on the preparations for the operation Marhaba. Regarding the measures on which his department is working with other stakeholders, Bourita said they are divided into five axes ranging from “improving consular services” to “communication and administrative support during stay in Morocco.” The first axis concerns the improvement of consular services to accompany the operation Marhaba 2022, through the establishment of a “central monitoring unit” at the ministry to oversee the progress of the transit operation in coordination with the authorities of host countries and the competent Moroccan authorities within the National Committee. This axis provides for the establishment of mobile consulates in the ports of transit throughout the operation to provide administrative services and guidance and assistance. It also aims to strengthen the consular centers, especially in Spain, France, Italy, Belgium and the Netherlands, by providing them with human and material resources, Bourita explained. Regarding the second axis relating to “fluid mobility,” Bourita mentioned the adoption of a sea transport plan mobilizing 32 ships on all routes connecting Moroccan ports to their counterparts in Spain, France and Italy, with a weekly capacity of about 478,000 passengers and 123,000 cars. Regarding air transport, the minister noted that the offer has been beefed up with an increase in the number of flights on very busy lines and the opening of new exceptional lines connecting the cities of the Kingdom and several countries of residence. Land transport too has been strengthened as new companies have been authorized to operate buses to carry Moroccan expatriates in Europe, he said. Regarding the third axis on “strengthening of infrastructure, logistics and services,” Bourita  said that an amount of 200 million dirhams has been allocated to the development, management and upgrading of ports, including 157 million dirhams for the port of Tangier Med. He also said that the Mohammed V Foundation for Solidarity has developed, on royal instructions, a special plan under which twenty reception centers have been upgraded, including 14 at the domestic level and 6 abroad. On the fourth axis relating to “safety and security,” Bourita noted that adequate human resources have been provided to support the transit operation during summer by mobilizing the required number of customs, gendarmerie and auxiliary forces officers and strengthening monitoring mechanisms. Regarding health security, the minister said that the relevant authorities have developed a simple and flexible health protocol consisting of presenting a vaccination certificate or a negative PCR test conducted 72 hours before the date of travel. Regarding the fifth axis on “communication and administrative support during stay in Morocco,” the FM announced the launch of the window dedicated to Moroccans abroad in public administrations and institutions and at the level of local authorities. A diversified cultural program will be developed in Morocco for the benefit of Moroccans in the world by the various stakeholders, he said. Bourita stressed that all measures and procedures taken by the Ministry, alongside the government departments, national institutions and all stakeholders, are in line with the vision and Royal guidelines to improve the services provided to the Moroccan community living abroad. On this occasion, the minister called for stepping up efforts to enhance this unique experience so that it can live up to the expectations of HM King Mohammed VI and contribute to strengthening the ties of the Moroccan expatriates, all generations included, with the Motherland.