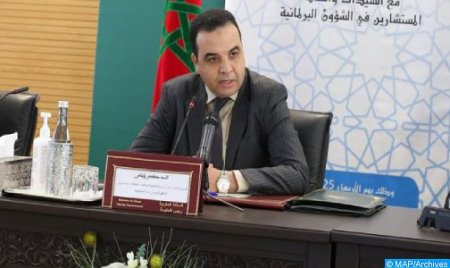 The Committee on Foreign Affairs, National Defence, Islamic Affairs and Moroccans Abroad on Tuesday organized a round table in Rabat on the latest developments of the first national cause. It was an opportunity for MPs to be informed on the latest developments of the process aimed at settling the issue of territorial integrity in a context marked by the growing support in favour of Morocco’s autonomy proposal within the framework of the territorial integrity of the Kingdom and its sovereignty. Speaking on this occasion, the Minister Delegate in charge of Relations with Parliament, Government Spokesman, Mustapha Baitas, underlined that ”the approaches followed by the Kingdom regarding this issue have evolved according to a changing international context,” before commending the ”remarkable action and considerable effort” of civil society in its defense of the national cause. In this regard, he highlighted the role of the Ministry of Foreign Affairs and the Interministerial Delegation for Human Rights in supporting associations in order to help them fulfill their advisory mission properly and effectively in international forums. He announced, on this occasion, that the government is currently working on the development of a national strategy regarding civil society in order to strengthen its consultative status. For his part, the Ambassador, Director General in charge of Bilateral Relations at the Ministry of Foreign Affairs, African Cooperation and Moroccans Abroad, Fouad Bazough, stressed that ”the proposal for autonomy of the southern provinces was presented by Morocco in response to the international community’s call for a consensual solution and to defuse the crisis”. The Moroccan proposal has been widely and favorably welcomed by the international community, he said, adding that the developments over the past two years, marked mainly by the opening of several consulates in the southern provinces, show the solidity of the Moroccan position and national mobilization, thanks to the High Instructions of HM the King and the far-sighted royal vision in matters of international relations. Morocco’s involvement in international initiatives and forums is part of a coherent national policy that has enabled the country to impose its credibility in the eyes of the international community, especially in its response to environmental, political and security challenges around the world. Thanks to this approach, Morocco is now known and recognized for its role as an active and even an essential actor in favor of stability in Africa and in the world. In her turn, the president of the Committee on Foreign Affairs, National Defence, Islamic Affairs and Moroccans abroad, Nadia Bouaida, stressed that the positive developments in favor of the country’s territorial integrity were achieved thanks to the far-sighted and proactive vision of the Sovereign, consecrating the modernist societal project as a strategic choice of the Kingdom and giving a preponderant interest to the African extension of Morocco in an effective materialization of South-South solidarity cooperation. She also said that the respect and consideration enjoyed by Morocco in regional and international forums as well as the consecration of democracy in the country in the perspective of a New Development Model are all fundamentals conducive to the consolidation of Morocco’s role as a major player in its African extension and its Arab and Euro-Mediterranean environment. Ms. Bouaida also highlighted the support enjoyed by the Moroccan proposal for autonomy from the international community, which considers this initiative to be fundamental in any search for a final settlement of the Moroccan Sahara issue, while calling to move up to prepare the ground for a definitive solution, paving the way for the return to their homeland of those held against their will in the Tindouf camps, in order to get involved alongside their compatriots in the management of their affairs within the framework of the autonomy proposed by Morocco. For her part, MP Leïla Dahi stressed that the resounding diplomatic successes achieved by Morocco are the result of the Sovereign’s far-sighted vision, at the origin of an active and effective diplomacy which has made it possible to multiply the successes with numerous recognitions of the Moroccanness of the Sahara, in particular that of the United States. These are diplomatic successes that reinforce the priority nature of the Moroccan autonomy proposal and reflect “soft power” in terms of Moroccan diplomacy, which is based on clarity, firmness and consistency, she said, before concluding that this reality enshrines the role of the southern provinces as Morocco’s gateway to Africa.