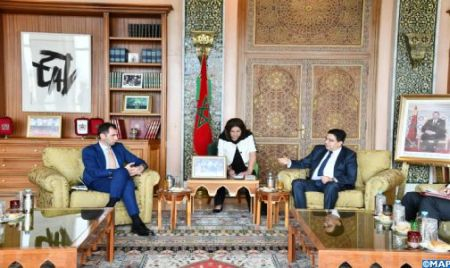 Italian MPs, Marco Di Maio (MP) and Urania Papatheu (senator) said, Friday in Rabat, that the creation of a parliamentary intergroup in support of the autonomy plan seeks to promote a “fair and consensual solution” to the artificial conflict over the Sahara. In a statement to the press after a meeting with Minister of Foreign Affairs, African Cooperation and Moroccans Abroad, Nasser Bourita, Di Maio welcomed the “serious and credible” efforts made by Morocco in the framework of the Moroccan autonomy proposal which aims to find a lasting, fair and consensual solution under the exclusive auspices of the United Nations. The Italian MP, on a visit to Morocco leading a delegation of parliamentarians making up the said intergroup of support for the autonomy plan, said that this creation comes at the initiative of several deputies and senators representing different Italian political groups, adding that the objective is to generate and enrich the debate on the Sahara issue under the Italian parliament. Similarly, the Italian senator, Urania Papatheu, said that the visit to Morocco of this delegation of Italian parliamentarians is part of an active parliamentary diplomacy in favor of the UN process on the Sahara issue, noting that this parliamentary intergroup supports the option of a consensual solution to the artificial conflict over the Sahara. The creation of this parliamentary intergroup in support of the autonomy plan in the Moroccan Sahara had been announced last Monday in Rome, at the initiative of several deputies and senators belonging to different Italian groups. In a statement, the members of this parliamentary intergroup stressed that in response to the call of the Security Council and the international community, “the Kingdom of Morocco has initiated a positive dynamic through the autonomy plan for the Moroccan Sahara, supported by various African, Arab, Asian and American countries”. The same source noted that “the dispute over the Moroccan Sahara remains one of the obstacles to the achievement of the Maghreb Union and its building on solid foundations and solidarity to face the common challenges in the region, especially in the security field and also in terms of the fight against terrorism and climate change”.