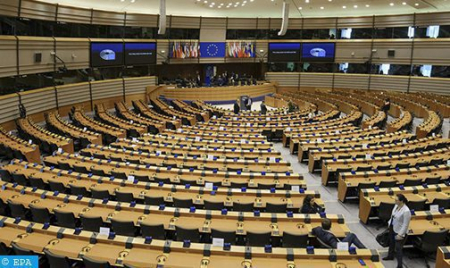 The Morocco-European Union Joint Parliamentary Committee held a series of meetings at the European Parliament in Brussels (May 31-June 3), with several MEPs belonging to different groups and committees. These meetings aim to deepen consultations and discussions with the European side, and to face the maneuvers hatched against Morocco’s territorial integrity, which affect the distinguished partnership linking Morocco and the EU, based on mutual respect and compliance with all international treaties, as well as the agreements concluded in the framework of the advanced status, the Committee said in a statement. Members of the Morocco-EU Joint Parliamentary Committee held talks with several leading parliamentarians from different political groups, including presidents of groups, groupings and committees, it added. During the said meetings, all parties expressed the common will to pursue the Euro-Moroccan dialogue and to find consultative solutions to the challenges they face through seizing all opportunities for cooperation to achieve sustainable security and mutual prosperity. The delegation of the Morocco-EU Joint Parliamentary Committee called for the consolidation and support of the Euro-Moroccan construction process through an approach aimed at establishing stronger links to promote joint development, according to the same source. The delegation also stressed the need to consider the Morocco-Europe partnership in all its aspects within a participatory and preventive approach to cope with all the risks that threaten the Euro-Mediterranean region In the same context, the delegation of the Parliamentary Committee took this opportunity to raise awareness among MEPs on the approach of a group of members of the European Parliament, from the Green group and supporters of the separatist doctrine, regarding the presentation of an amendment on “occupied territories and non-self-governing territories” to create confusion between the occupied Palestinian territories and the issue of Moroccan Sahara, as well as an urgent draft recommendation on freedom of the press in Morocco. After the members of the Moroccan parliamentary delegation have alerted several MEPs and expressed their dissatisfaction and total rejection of this unjustified initiative and the malicious intentions behind the presentation of this amendment and of the urgent draft recommendation, which would generate misinformation and disrespect for the principle of objectivity, the draft recommendation was rejected on Thursday, June 2, 2022, at the meeting of the Conference of Presidents. Furthermore, the amendment was also opposed at the Committee on Foreign Affairs meeting on the same day. The parliamentary delegation is composed of Hicham Ait Mana and Zeina Chahim from the RNI Group and Abdelmajid Fassi Fihri from the Istiqlali Group of Unity and Egalitarianism.