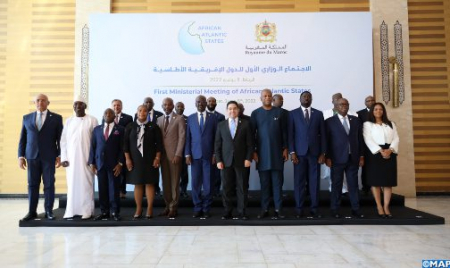 The Ministers of the Atlantic African States commended, on Wednesday in Rabat, His Majesty King Mohammed VI’s vision to make the Atlantic African area a pragmatic and relevant inter-African framework for cooperation. The Atlantic African States’ ministers have also hailed, in a statement released at the end of the 1st meeting held in Rabat at the invitation of Morocco, the Sovereign’s commitment for reactivating this geostrategic consultation framework between African Atlantic States. After stressing that this meeting is taking place in a very particular and challenging regional and international context for the States of the region, the Ministers reaffirmed their firm commitment to pursue the dialogue around common principles, shared challenges and converging interests with a view to making the African Atlantic space a zone of peace, stability and shared prosperity. Participants have also recognized the necessity to seek political convergence, the economic potential and the common security challenges within the African Atlantic space. In addition, the Ministers expressed their deep concern over the increasingly complex threats posed by terrorism, transnational organized crime and maritime piracy; the acuteness of environmental challenges and their consequences on food security and human flows; as well as the challenges of economic and human development, competitiveness and attractiveness. Held with the participation of 21 countries of the Atlantic seaboard, fifteen of which are represented at ministerial level, the 1st ministerial meeting of the African Atlantic States represented an opportunity to develop a common African vision of this vital space, to promote an African Atlantic identity and to defend the strategic interests of the Continent with a single voice.