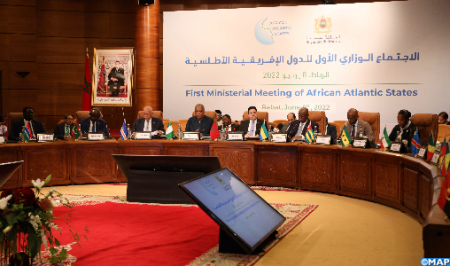 The Ministers of the Atlantic African States have sanctioned their first meeting, held on Wednesday in Rabat, by the adoption of the ‘Rabat Declaration’. In this Declaration, the Ministers of the Atlantic African States welcomed His Majesty King Mohammed VI’s vision to make the Atlantic African area a pragmatic and relevant inter-African framework for cooperation, as well as His commitment for reactivating this geostrategic consultation framework between African Atlantic States. They also decided to establish three thematic groups, in charge of political and security dialogue, the blue economy, maritime connectivity and energy, and sustainable development and the environment, emphasizing the importance of optimizing the Atlantic African space for a more concerted and coordinated management of migration governance. The Minister of Foreign Affairs, African Cooperation and Moroccans Abroad, Nasser Bourita, stressed at the opening of this meeting, that Atlantic Africa has almost everything to be an area of peace, stability and shared prosperity. He recalled that since 2013, His Majesty King Mohammed VI called to “revive the activities of the Conference of African States bordering the Atlantic and allow it to fully play its role.” The process born in Rabat in 2009 is reborn today under a new light, “but with the same horizon that we share, from Cape Spartel to the Cape of Good Hope,” said Bourita, emphasizing the strategic importance of this space that is no longer to prove. Held at the invitation of Morocco with the participation of 21 countries of the Atlantic seaboard, fifteen of which are represented at ministerial level, the 1st ministerial meeting of African Atlantic States represented an opportunity to develop a common African vision on this vital space, to promote an African Atlantic identity and defend the strategic interests of the Continent with a single voice. This Moroccan initiative confirms the Kingdom’s commitment to optimizing the strategic value of the Atlantic and its desire to see all the riparian countries gather on both sides of the Atlantic around common principles and converging interests.