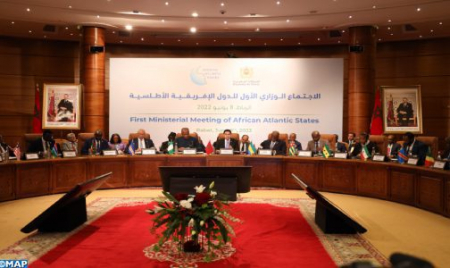 The ministers of the Atlantic African states on Wednesday agreed to reactivate the Permanent Secretariat of the Conference, based in Rabat, in charge of coordinating actions and preparing meetings. In the Declaration of Rabat, sanctioning the first meeting, the Atlantic African ministers stressed that the Permanent Secretariat of the Conference will also act as a platform for the exchange of information on challenges and opportunities in the African Atlantic space. They also decided to establish the African Atlantic Rabat Process for strengthening cooperation between states, calling for strengthening transatlantic cooperation, particularly with Latin American countries bordering the Atlantic Ocean. Held at the invitation of Morocco with the participation of 21 countries of the Atlantic seaboard, fifteen of which are represented at the ministerial level, the 1st Ministerial Meeting of the African Atlantic States represented an opportunity to develop a common African vision on this vital space, to promote an African Atlantic identity and to defend the strategic interests of the Continent with a single voice.