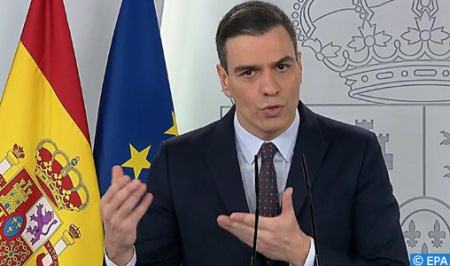 The support of the Spanish government for the Moroccan autonomy initiative for the Sahara is part of a “state vision to bring stability to the whole region” and meets an international dynamic in favor of the approach adopted by Morocco, said the President of the Spanish government, Pedro Sanchez, on Wednesday. “Spain must have a state vision and bring stability to the region. (…) the position taken by the government is the best to initiate dialogue and resolve this long-standing conflict,” Sanchez said before members of the Congress. “The position of Spain is consistent with that of our European partners and many other countries,” observed the head of the Spanish executive, recalling that “France has supported Morocco’s proposal for years, and other important countries such as Germany, the United States, and the Netherlands are joining in.” The European Commission (EC) and the EU’s foreign policy chief have also expressed their support for the Moroccan proposal, Sanchez underlined. “After so many decades of conflict, many countries recognize that autonomy is the most realistic proposal,” he argued, adding that Spain does not want to be a “mere spectator” concerning the Sahara dispute. “Spain has a special interest in the settlement of this dispute that can no longer be the object of an endless wait-and-see attitude, especially in the current geopolitical context,” Sanchez insisted, emphasizing the imperative of resolving this dispute within the framework of the UN. “After 46 years, we must understand that it is necessary to evolve our positions and favor a framework of dialogue for an agreed-on solution,” he concluded.