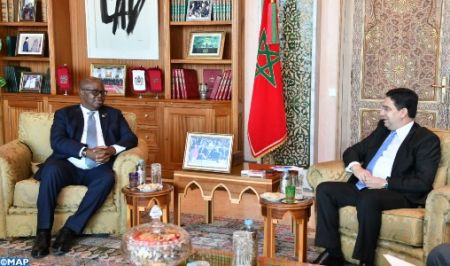 Morocco and Gabon commended, on Wednesday, the comprehensive and multiform solidarity between the two countries, during talks held between Minister of Foreign Affairs, African Cooperation and Moroccans Abroad, Nasser Bourita, and his Gabonese counterpart, Michaël Moussa-Adamo, on the sidelines of the Ministerial Conference of African Atlantic States that took place in Rabat at the invitation of Morocco. “The two Ministers commended the comprehensive and multiform solidarity existing between the two countries, as advocated by HM King Mohammed VI and His Brother H.E. President Ali Bongo Ondimba,” says a joint statement issued following these talks that are part of the ongoing strengthening of the Morocco-Gabon strategic relations. The holding of this meeting reflects the high interest shown by the two countries in strengthening their strategic partnership that is based on relations of historical brotherhood, whose first milestones were laid by HM King Hassan II and his brother H.E. President Omar Bongo Ondimba, may God have their Souls in His Holy Mercy, continues the statement. The two FMs welcomed the perfect concordance of the points of view on the various regional and international issues of common interest, as well as the shared will of the two Heads of State to make the exemplary relations between the two countries a model of inter-African cooperation, based on the values of solidarity, exchange and sharing. In the same spirit, the two sides commended the mutual support to the Moroccan and Gabonese candidacies in the various regional and international fora, stressing the importance of stronger communication and coordination within the various multilateral platforms (AU, UN, … etc. …) so that the diplomatic actions undertaken at the level of these bodies are in line with the official positions expressed by the two countries on the various issues of common interest. In this regard, Bourita expressed his sincere thanks to the Gabonese side for its strong support for all Moroccan candidacies to various international organizations and bodies, including the Peace and Security Council of the African Union (2022-2025) and the United Nations Security Council (2028-2029). Welcoming Gabon’s election to the Human Rights Council (2021-2023) and to the United Nations Security Council (2022-2023, for the fourth time), Morocco’s FM voiced recognition of the role played by Gabon at the regional and international levels and of its active contribution to promoting peace and security in Africa. The two sides stressed the importance of further consolidating the bilateral strategic partnership, as recommended by the Heads of State of the two brotherly countries, by further strengthening trade and investment between Morocco and Gabon, which are key players in regional integration in Africa. The two officials welcomed the progress achieved in the implementation of the Agreements signed during the Royal Visits to Gabon in March 2014 and June 2015. They also called for stronger cooperation between the two countries through a greater contribution of the private sector. In this perspective, the two sides stressed the need to revitalize the Morocco-Gabon Business Council and to hold an Economic Forum to diversify Gabon’s economy through business partnerships in agriculture, energy, mining, tourism, education, and digital economy and to support the country through investments in the sectors targeted by its Economic Transformation Acceleration Plan.