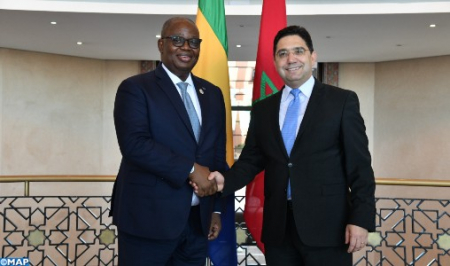 The Gabonese Minister of Foreign Affairs, Mr. Michaël Moussa-Adamo, reiterated, Wednesday in Rabat, his country’s support for the Moroccanness of the Sahara as well as its full support for the Autonomy Plan which constitutes “the only credible and realistic solution to the regional dispute over the Sahara”. In a joint statement issued following his talks with the Minister of Foreign Affairs, African Cooperation and Moroccans Abroad, Mr. Nasser Bourita, on the sidelines of the First Ministerial Meeting of African Atlantic States, the Gabonese top diplomat expressed his country’s support for the efforts made by the United Nations, enshrining the pre-eminence of this Moroccan initiative for the final settlement of this dispute, within the framework of respect for the sovereignty of the Kingdom of Morocco over its Sahara. The Gabonese Minister also underlined that the opening by his country of a Consulate General in Laayoune in January 2020, is in line with the dynamics of international recognition of the territorial integrity of the Kingdom, thus showing the strength of the strategic partnership linking the two brotherly countries at the highest level. On this basis, the joint statement points out, the two sides have agreed to work together for the respect of the standards and procedures relating to this issue within the bodies of the African Union (AU), in particular Decision 693 of the African Union which established the exclusivity of the UN as a framework for the search for a solution to the regional conflict over the Moroccan Sahara. During their meeting, the two ministers welcomed the perfect convergence of views of the two countries on the various regional and international issues of common interest, as well as the shared will of the two Heads of State, His Majesty King Mohammed VI and His Excellency President Ali Bongo Ondimba, to turn the exemplary and fraternal relations between the two countries into “a model of inter-African cooperation, based on the values ​​of solidarity, exchange and sharing”.