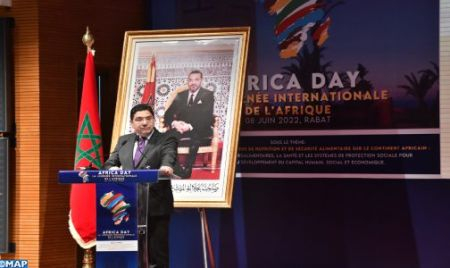 Minister of Foreign Affairs, African Cooperation and Moroccans Abroad, Nasser Bourita, said on Wednesday in Rabat that Morocco has a clear vision on the future of the African continent. Speaking on the occasion of the celebration of “Africa Day” held at the National Library of the Kingdom of Morocco, Bourita said that HM King Mohammed VI has laid the groundwork for this vision in light of the geostrategic changes that the continent is experiencing and which require tireless action at the bilateral and continental levels, stressing that this Royal vision is implemented through proactive and bold diplomacy, as well as multidimensional efforts that go beyond the diplomatic aspect to include all living forces, public, civil society and private actors. In this sense, the Minister noted that the royal visits to the countries of the African continent are the main reference of this continental policy of the Kingdom which, far from being arbitrary, is a strategic and sincere choice. The structuring aspects of Morocco’s African policy have been developed on the basis of three royal speeches delivered from three major African capitals, namely Abidjan on February 24, 2014, Dakar on November 16, 2016, and Addis Ababa on January 31, 2017, he noted, adding that this policy is based on optimism and confidence in the potential of the continent, the equal partnership, effective solidarity, the creation of value and the centrality of the human dimension. This human dimension, added Bourita, is strengthened through the relations woven by the African communities present in Morocco, and Moroccans residing in various African countries, these ties are forces that ensure rapprochement and cohesion within the African family. In addition, the Minister said that the African continent is facing challenges that are accelerating and which can be addressed only by relying on the solidarity and collective capacities of the countries of the continent, considering that the theme of Africa Day, celebrated this year under the sign “building resilience in terms of nutritional and food security on the African continent”, highlights this reality. He noted, in this sense, that food security is one of the points that reflects the Moroccan solidarity with the continent, recalling that the Kingdom has signed more than 38 agreements related to the agricultural field with 18 African countries, in addition to the launch of the African Agriculture Adaptation Initiative, called “Triple A”, the commitment of the Office chérifien du phosphate (OCP) in the development of fertilizer production units in Ethiopia, Ghana, Nigeria, Zambia, Rwanda and Gabon, in addition to a number of training programs dedicated to farmers. “The African continent must actively invest in the important opportunities it has, to meet the aspirations of its countries and its people,” said Bourita, emphasizing the need for the emergence of a strong and proactive “new Africa” that is determined to defend its interests.