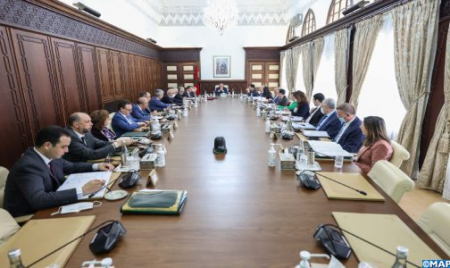 The Council of Government, held on Thursday under the chairmanship of Head of Government Aziz Akhannouch, examined the Inter-African Convention on the establishment of a technical cooperation program, adopted in Uganda’s Kampala on August 1, 1975. The Council also examined Draft Law 24.22 approving the said convention, presented by Abdellatif Miraoui, Minister of Higher Education, Scientific Research and Innovation on behalf of Nasser Bourita, Minister of Foreign Affairs, African Cooperation and Moroccans Abroad. During a press briefing held after the Council, Government Spokesperson Mustapha Baitas said that the Inter-African Convention on the establishment of a technical cooperation program aims to promote a spirit of cooperation and solidarity between African countries and to provide competent and qualified experts for the benefit of countries that need them. This convention also aims to facilitate the comparison between industrial sciences and research sciences as well as experiences and expertise related to development in African countries, said Baitas. According to the government spokesperson, this convention also aims to provide more opportunities for African experts to develop their expertise, including addressing the African countries’ problems.