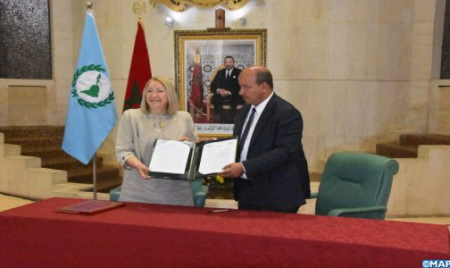 The House of Advisors (upper house) and the Latin American and Caribbean Parliament (PARLATINO) affirmed, Monday in Rabat, their determination to work jointly to consolidate the common achievements accumulated at bilateral and multilateral levels. In a joint statement issued following discussions held between speaker of the House of Advisors, Naama Mayara, and president of PARLATINO, Silvia del Rosario Giacoppo, on a visit to Morocco, the two parties expressed their satisfaction with the bilateral relations that unite the two legislative institutions since the signing of the agreement on the accession of the Moroccan Parliament as a permanent observer member of PARLATINO, on April 27, 2018. Both parties have affirmed, in this document inked by Mayara and Rosario Giacoyo, their adherence to the founding principles of the Afro-Latin American Parliamentary Forum “AFROLAC”, as well as the content of the “Panama Declaration”, which crowned the work of the summit, which took place in the presence of the speaker of the House of Advisors in his capacity as president of the Association of Senates, Shoora and similar councils in Africa and the Arab world, chairman of the Executive Committee of the African Parliamentary Union, Mohamed Ali Houmed and president of the Parliament of the Economic Community of West African States (ECOWAS), Siddie Mohamed Tunis, in addition to the president of the Parliament of Latin America and the Caribbean. In this context, the General Secretariat of the forum “AFROLAC” was officially inaugurated at the House of Advisors of the Kingdom of Morocco and the Parliament of Latin America and the Caribbean. The regional federations of Africa and Latin America were called upon to work together to contribute to the success of the next summit, which will be hosted by the Moroccan Parliament at the end of this year. Both parties also reiterated their “great esteem and gratitude to His Majesty King Mohammed VI for having honored the Moroccan space at the headquarters of PARLATINO in the Republic of Panama, by granting His august name to this space. The joint statement also noted that in view of the growing demand for this space and the opportunities it offers to connect and ensure communication between the parliaments of the 23 member states of this important regional parliamentary organization, the president of PARLATINO has asked “to expand its area and diversify its roles so as to make this space worthy of bearing the name of His Majesty King Mohammed VI”. It is also a question of making it a space that promotes the culture and civilizational history of the Kingdom of Morocco, through its twelve regions, and consolidating the common cultural and human heritage based on the values and commonalities between the Kingdom of Morocco and the countries of Latin America and the Caribbean. Regarding regional and international issues of common interest, both parties emphasized the convergence of the views of the two legislative institutions on many current issues, adding that the founding principles of the Parliament of Latin America and the Caribbean and those of the Kingdom of Morocco are consistent with the values and principles based on non-interference, respect for the sovereignty and territorial integrity of States and the peaceful settlement of disputes.