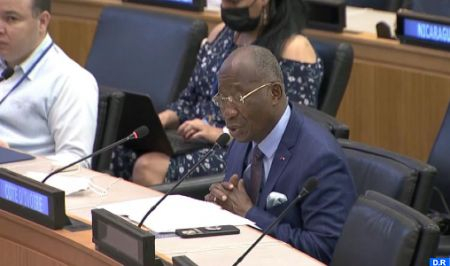 Côte d’Ivoire stressed, before the members of the Committee of 24 (C24) of the UN in New York, that the autonomy plan presented by Morocco to resolve the regional dispute over the Sahara is the “compromise solution”. “The Moroccan initiative of broad autonomy in the Sahara, which enjoys wide international support, is a compromise solution in accordance with international law, the Charter and resolutions of the Security Council and the General Assembly of the United Nations,” said Ambassador Leon Kacou Adom, Permanent Representative of Côte d’Ivoire to the UN. He noted that this plan also takes into account the specificities of the Sahara region whose inhabitants regularly participate in various elections to freely choose their various representatives. “This was the case during the elections of September 8, 2021 with a very strong participation of the population of the Moroccan Sahara,” said the diplomat, welcoming the participation in this session of the C24, of elected officials from these democratic consultations to testify to the dividends of this Moroccan initiative that contributes to the welfare of the population. Referring to the political process conducted under the exclusive auspices of the United Nations, Adom encouraged the Personal Envoy of the UN Secretary-General for the Sahara, Staffan de Mistura to continue his mediation efforts on the basis of the progress made by his predecessor, especially by reactivating the round tables of negotiations with the effective participation of Algeria, Morocco, Mauritania and the “polisario”. He urged these four participants to remain committed by showing realism and spirit of compromise, throughout the process in order to achieve a peaceful settlement of the regional dispute over the Sahara.