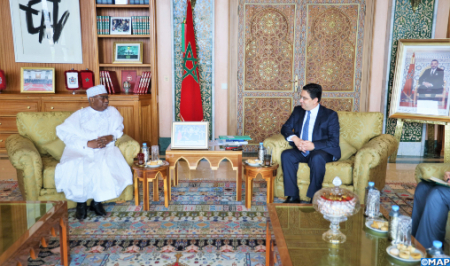 For HM King Mohammed VI, Morocco’s action within the Organization of Islamic Cooperation (OIC) must be an act of solidarity and commitment to all the fundamental projects of the Organization, said, Tuesday in Rabat, Minister of Foreign Affairs, African Cooperation and Moroccans abroad, Nasser Bourita. Speaking at a joint press briefing with the Secretary-General of the OIC, Hissein Brahim Taha, following bilateral talks, Bourita stressed the role and importance given by the Sovereign to this Organization.  Morocco, upon instructions of HM the King, gives its full support to the SG of the OIC, to his actions and projects so that he can carry out his mission within the organization and meet all the challenges it faces, Bourita said. The regional and international context raises a number of challenges to the Islamic Ummah, noted Bourita, stressing that the OIC is a fundamental space for coordination among Muslim countries that must adapt to meet the challenges of political instability, economic growth, and Islamophobia that is spreading in several parts of the world. The OIC has an important role to play to carry out its work, said Bourita. HM the King, as Chairman of the Al Quds Committee under the OIC, will continue to act with the same commitment in defense of the Holy City, he added. Morocco, through the Bayt Mal Al Quds Agency, is a key player in strengthening the resistance of the Maqdessis and enabling them to preserve the historical, legal and Muslim character of the Holy City, Bourita stated. Morocco counts on the General Secretariat of the OIC to ensure that the Bayt Mal Al Quds Agency is an operational tool acting on the ground to strengthen the resistance of the Maqdessis in this city, the minister added. Within the Al-Qods Committee, HM the King has constantly reiterated Morocco’s position in defense of the Palestinians’ legitimate rights within the framework of the two-state solution, with a Palestinian State on the 1967 borders with East Jerusalem as its capital, he said. Bourita also assured that Morocco is willing to share its experience and expertise with the OIC in several areas to enrich the cooperation programs that the Secretary-General wishes to conduct. The model of religious cooperation between Morocco and African countries and some European countries can be a model of inspiration for the action that the OIC can carry out at the international level, Bourita concluded.