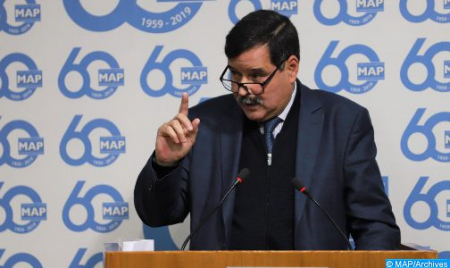 Inspired by the title of the American movie “Airplane!”, the writer-journalist Talaâ Saoud Al Atlassi takes the liberty of asking: “Is there a state in Algeria?”, concluding that there is, indeed, in this country a president of the republic, a parliament, institutions or an army but “nothing in this country gives the impression of the existence of a state”. In a column published on the online news site “Machahid 24”, this specialist on Algeria notes that one of the main definitions of the state is that this entity is the expression of the general interest and the guarantor of its continuity but only here, “it turns out that the decisions of the institutions in this country do not reflect the general interest as well as, neither, they do not contribute to its preservation. Moreover, it can be said that these institutions do not have any popular legitimacy, one of the fundamentals of public management”. He stresses, in this regard, that “the constitution itself was adopted in a referendum marked by the lowest popular participation in the history of Algerian elections, a strong abstention as was the case for the election of the president and members of parliament. As a result, it can be said that the institutions in Algeria are formal and have no influence on the management of public affairs in Algeria except for the army”. The history of power in Algeria since 1962 is simply a military history without any manifestation of the civilian component. And if for several years, the army generals hid behind the facade of a civilian government, today, they do not even take this precaution, publicly displaying themselves as the real holders of power. Proof that civilian institutions are formal, the last Council of Ministers chaired ten days ago by president Tebboune, he underlines, explaining that in a self-respecting state, the Council of Ministers does not meet to discuss and deliberate on draft laws but to adopt them before submitting them to parliament for promulgation. He adds that just after this surreal Council of Ministers, there was a meeting of the High Security Council where the generals have the last word and at the end of which it was decided to take a “punitive decision” against Spain for having taken a position in favor of the issue of territorial integrity of the Kingdom, a decision on the freezing of the cooperation and good neighborliness agreement and the cessation of trade with Spain. Once again, the generals of the Algerian regime are showing themselves to be the true masters of Algeria. He stresses that the Council of Ministers in Algeria has become a pastime for the Algerian president to give the impression of the existence of a civil state entity. Because the real decision-makers are the generals who go so far as to impose on the president of the republic and his government to declare “war” on Spain for its support to Morocco. He recalls that the Algerian Ministry of Foreign Affairs hastened to recall the Algerian ambassador in Madrid for consultations just after the Spanish support of the Moroccan proposal for a peaceful solution to the conflict over the Moroccan Sahara, considering that “the Algerian decision to freeze the cooperation and good neighborliness agreement with Spain as well as the cessation of trade escapes any form of political and diplomatic reading”. The columnist also notes that “this behavior of Algerian generals has left all analysts perplexed in their attempt to understand the ins and outs of this decision which is identified with an interference in the affairs of the foreign policy of Spain, and which also expresses the insolence of the Algerian Ministry of Foreign Affairs in asking Spain to return to its decision on its recognition of the credibility and pragmatism of the Moroccan autonomy plan, the only solution to the conflict over the Moroccan Sahara. “And for good reason, the capital of the generals of the Algerian regime lies in their hostility towards Morocco, which legitimizes their power and which also serves as a scarecrow against the opposition, shamelessly taking advantage of the wealth of the countries under the pretext of being at war with a formidable enemy,” he said, before concluding that “the long soap opera of the conflict over the Moroccan Sahara is in its final episodes since the international community no longer believes in the Algerian allegations, believing rather and above all in the credibility and relevance of the Moroccan proposal to settle this conflict definitively and this, for the great good of the whole region. And the Spanish stance today gives a tremendous boost to this orientation of the international community and increasingly isolates the Algerian generals.