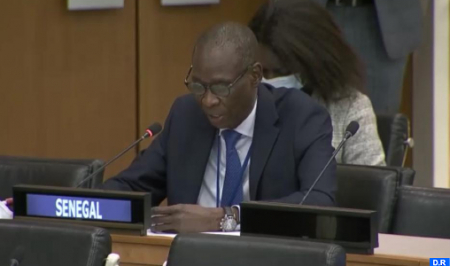 Senegal reaffirmed, in New York, its support for the autonomy initiative presented by Morocco to resolve the regional dispute over the Sahara. “The advanced autonomy initiative proposed by Morocco remains, for my delegation, the appropriate framework in accordance with international law, the UN Charter and resolutions of the Security Council and the General Assembly,” said Senegal’s Permanent Representative to the UN Cheikh Niang at the annual meeting of the UN C-24. The Senegalese diplomat also said that his country reiterates its support for a final, just, lasting and mutually acceptable political solution to the regional dispute of the Moroccan Sahara, through a process conducted under the exclusive auspices of the United Nations, on the basis of resolutions adopted by the Security Council since 2007. He welcomed, in this context, the first regional tour that the UN Secretary-General Personal Envoy for the Sahara, Staffan de Mistura, has made last January, wishing him success in his mission. Referring to the reform dynamic underway in the southern provinces, the Senegalese diplomat highlighted the progress made by the Moroccan government on the ground, particularly in the promotion of human rights and democracy, as well as the considerable efforts made to promote the economic and social development of the Moroccan Sahara while ensuring the empowerment of its population. All these advances have ended up testifying to its willingness to resolve this dispute, he said. He welcomed the massive participation of the populations of the southern provinces in the triple legislative, communal and regional elections to elect their representatives. “The participation of these representatives in the important meetings and discussions, namely the Geneva round tables, the C24 sessions, the regional seminars including the one for the Pacific, remains a positive signal that reinforces my Delegation in its optimism for a successful outcome of this conflict,” he stressed. At the same time, the Senegalese diplomat urged the parties to the conflict to remain mobilized in the constructive dynamics instilled by the two Geneva roundtables to accompany the political process initiated by the United Nations until its completion, by showing realism and spirit of compromise. “To advance this dispute in this direction but also given its impact on the stability of the region, we insist on the importance of respecting the ceasefire of 1991,” he said. He also recalled that his country inaugurated on April 5, 2021, its Consulate General in the Moroccan Sahara, where it has more than 6,000 nationals, to mark its support for the efforts of the Kingdom in this region.