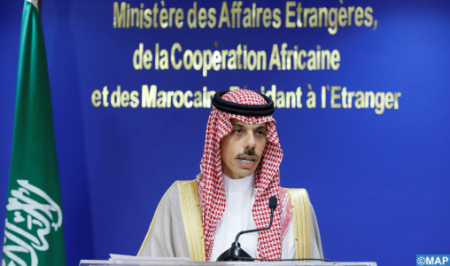 The Saudi Foreign Minister, H.H. Prince Faisal bin Farhan bin Abdullah Al-Saud, said Thursday, that the 13th session of Moroccan-Saudi Joint Commission meeting constitutes an “important and strong impetus” to cooperation between the two countries. “This meeting confirms the depth of relations between the two countries and it is an occasion to seize the great opportunities that exist in order to strengthen coordination and bilateral cooperation, especially in the economic, energy, digital economy, industry and mineral wealth,” Prince Faisal Bin Farhan said at a joint press briefing following his talks with Minister of Foreign Affairs, African Cooperation and Moroccans abroad, Nasser Bourita. “There are other areas in which we can act and opportunities that have not been sufficiently exploited. This is what justifies the commitment of the leaders of both countries to achieve this coordination and cooperation,” he added, stressing that the two kingdoms aspire to more cooperation and consultation in various areas. In this regard, the Saudi minister said that preparations are underway for the signing of a number of agreements and memoranda of understanding between government departments and private sector companies of the two countries, noting that a significant number of these draft agreements are under review in order to reach the final versions. Through the Joint Commission, work will be done to “set clear and precise objectives for the coming period … and to achieve them for the benefit of both friendly countries and peoples,” he pointed out. In addition, he underlined that discussions with his Moroccan counterpart, Nasser Bourita, have focused on a number of bilateral, regional and international issues, noting a “complete consensus” in the positions of the two countries and the importance attached by their leaders to the operationalization of coordination and cooperation in order to achieve the interests of the two countries and those of the Arab Ummah, as well as peace and international security. The coordination between the two Kingdoms is “uninterrupted and constant” and it is illustrated in mutual support in international forums, whether it is about appointments or initiatives, he added. Both sides are constantly working to develop joint initiatives through which the two kingdoms present “a very positive model” for the world and the international community.