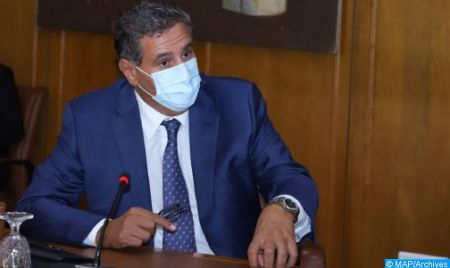 Head of Government Aziz Akhannouch received, Thursday in Rabat, HH Prince Faisal bin Farhan bin Abdullah Al Saud, Minister of Foreign Affairs of the Kingdom of Saudi Arabia, who is on a working visit to Morocco. This meeting was an opportunity to reaffirm the excellence of cooperation relations between the two countries, which enjoy the high solicitude of HM King Mohammed VI and his brother, the Custodian of the Holy Mosques King Salman bin Abdulaziz Al Saud, said a statement by the department of the Head of Government. At the beginning of the meeting, the Head of Government welcomed the consistency of the Saudi position, which constantly supports the territorial integrity of Morocco, the same source said. The two parties then discussed the importance of holding a new session of the Moroccan-Saudi High Joint Commission, the main cooperation mechanism between the two countries, an event that “constitutes an important step for the revitalization and intensification of bilateral cooperation, in line with the sincere and shared will of the two countries and the opportunities offered by their respective economies,” according to the statement. The two sides also discussed the prospects for economic cooperation and encouragement of investment initiatives, stressing the importance of strengthening the involvement of economic actors and businessmen of both countries in this dynamic, which will open new and promising horizons to strengthen, develop and expand the framework of bilateral cooperation between the two kingdoms, the statement said.