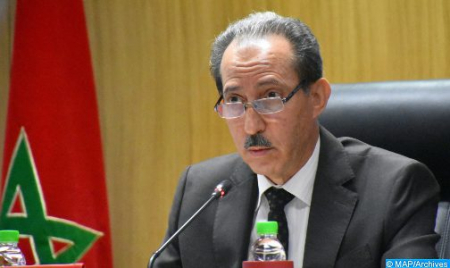 The Attorney General of the King at the Court of Cassation, President of the Public Prosecutor’s Office, El Hassan Daki, on Monday held talks with the Attorney General of the Republic of Sudan, Khalifa Ahmed Khalifa, currently visiting Morocco. During these talks, the two parties tackled means to strengthen bilateral judicial cooperation, discussing its prospects in the judicial field together with expertise exchange to improve the judicial system. Daki gave, on this occasion, a brief overview of the Moroccan judicial system, as well as developments in the justice sector, in light of the 2011 Constitution, listing the missions, roles and prerogatives of the Presidency of the Public Prosecutor’s Office and the prosecutors’ offices of various jurisdictions of the Kingdom. This interview was an opportunity to stress the importance of continuing contacts between the two institutions and activate the provisions of the Memorandum of Understanding (MoU) concluded between the Public Prosecutor’s Office in Sudan and the Presidency of the Public Prosecutor’s Office in the Kingdom in 2018. The Moroccan official further recalled, in a statement to the press, that this memorandum aims to deepen and strengthen cooperation between the two countries in the field of justice. Daki assured that the visit of the Sudanese Attorney General and the accompanying delegation is an opportunity to activate this MoU, expressing his desire to strengthen coordination and cooperation between the two countries,” which have strong historical relations. For his part, Khalifa said in a similar statement that this visit is part of the constant coordination between the two countries in the field of justice and exchange of experiences and best practices in the field of justice. The Sudanese official, accompanied by a delegation of officials from the Public Prosecutor’s Office of his country, is visiting the Kingdom until June 25, to consolidate cooperation between the two countries in the field of justice.