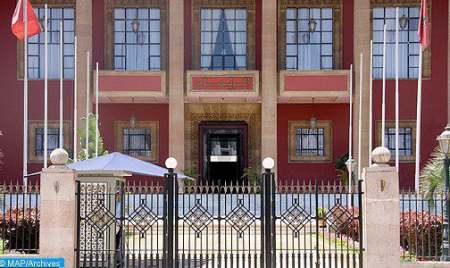 Deputy Speaker of the House of Representatives (Lower House), Khadija Zoumi, held, Monday in Rabat, talks with Secretary-General of the National Popular Congress of Al Quds, General Bilal En-netcha, who is visiting Morocco at the head of a Congress delegation. The talks between the two parties, which were attended by the Director in charge of Bayt Mal Al-Quds Agency affairs, Mohamed Salem Cherkaoui, focused on the situation in the city of Al-Quds, said a statement from the lower House. On this occasion, Zoumi, reiterated Morocco’s keenness to defend the Palestinian cause and its firm support under the leadership of His Majesty King Mohammed VI, Chairman of the Al Quds Committee, noting that Moroccans of all backgrounds consider the Palestinian cause their cause and Palestine their second country. In this vein, She stressed that Morocco would continue to defend the Palestinian cause and the legitimate rights of Palestinians. For his part, En-netcha, said that this visit comes within the framework of the exchange of visits between the Congress and the Bayt Mal Al-Quds Agency to support Al-Quds and the locals of Al-Quds. The Secretary-General of the National Popular Congress of Al Quds expressed his appreciation for the positions of His Majesty King Mohammed VI in support of Al Quds and his efforts at the international level in this regard, welcoming the signing of the “Al Quds Call” by HM the King and His Holiness Pope Francis in March 2019, on freedom of religion and peace in the Holy City. He also reviewed the difficult circumstances and the suffering of the locals of Al-Quds Al-Sharif, highlighting the steadfastness of the people of Palestine and Al-Quds and their struggle to achieve their legitimate rights. In their statements, the members of the delegation of the Congress praised the commitment of the Kingdom of Morocco to the defense of the Palestinian cause, praising in this regard the critical role played by the Bayt Mal Al-Quds Al-Sharif Agency through its services on the ground for Al-Quds and its locals. Furthermore, the delegation members gave an overview of the National Popular Congress of Al Quds, expressing their hope to build solid cooperation relations between Morocco and Palestine.