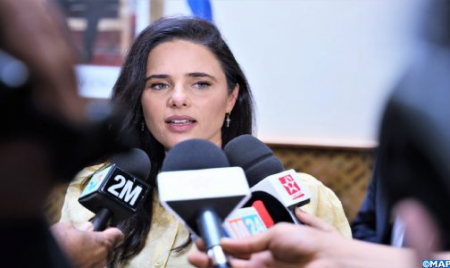 The revival of Morocco-Israel relations is likely to open prospects for joint actions, Israel’s Interior Minister Ayelet Shaked told the press after her talks, Tuesday in Rabat, with her Moroccan counterpart Abdelouafi Laftit. The Israeli official described her meeting with Laftit as “fruitful”, which was an opportunity to discuss the implementation of a set of joint projects. Laftit had held a working meeting with his Israeli counterpart in which participated senior officials from the departments of the Interior of both countries. According to a statement from the Ministry of Interior, this meeting comes in the wake of the Joint Declaration between the Kingdom of Morocco, the United States of America and the State of Israel, signed before His Majesty King Mohammed VI in December 2020. It reflects the commitment of both countries to resume full official contacts between Moroccan and Israeli counterparts, the statement said. The working meeting was an opportunity for a fruitful exchange between the two ministers on issues within the competence of their respective departments and the promising prospects for cooperation between the two countries, reported the same source.