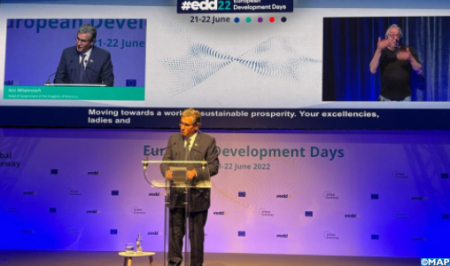 Morocco will accompany the European Union in the deployment of the innovative Global Gateway strategy, which contributes to an integrated development and a strengthened connectivity that is mutually beneficial to Europe and Africa, said Head of Government Aziz Akhannouch on Tuesday. Morocco will accompany the European Union in the deployment of this important strategy for our continent. The strongest support we can give is that of exemplary successes that we share. This is the spirit in which the Kingdom is involved,” said Mr. Akannouch, who spoke at the opening of the European Development Days (EDD), held in Brussels. Global Gateway, which places Africa at the heart of its strategy as the main beneficiary of the project, “will help to take a qualitative step towards a world of sustainable co-prosperity,” he said. Recalling that Morocco, which has intensified over the past 20 years its trade with its home continent, is now the first African investor in West Africa, and the second on the continent, the head of government said that the place occupied today by Morocco is the result of the Vision of HM King Mohammed VI. “The Nigeria-Morocco gas pipeline is one of the most striking illustrations, Morocco is planning long-term infrastructure projects with our continent,” he said, noting that this gas pipeline project linking Africa to Europe should be included as a flagship initiative of the Global Gateway plan as it represents a powerful vector of regional and bicontinental integration. He added that “throughout its history, Morocco has played the role of a bridge – a kind of gateway – between Africa and Europe. Building sustainable and reliable partnerships is, so to speak, in the Kingdom’s DNA.” Very soon after the launch of European integration, Morocco and the EU have built, patiently and over time, a partnership of exception, which continues to develop today, thanks to a strong and constant Royal Will,” he recalled, noting that “Morocco and the EU wanted [this partnership] to be comprehensive, ambitious, equal, based on shared values and carried by common interests, which makes it today a strategic, reliable, necessary and unique partnership.” Akhannouch stressed, in this regard, that “Morocco and the European Union can now invest in fields of future cooperation. Morocco is the first country in the world to engage in the conclusion of a Green Partnership with the EU. This avant-garde orientation of the Morocco-EU Partnership, and its proven ability to deliver results, gives it a force of emulation, projection and success, beneficial to both the African continent and the Euro-Mediterranean region,” he said. The head of government said, moreover, that Morocco has proved its resilience to the pandemic and has succeeded in a high-level vaccination campaign, with more than 63% of the population fully vaccinated, while having the ambition to go much further to achieve effective prevention. It is within this framework that under the enlightened vision of HM King Mohammed VI, Morocco has proceeded to launch the construction of a vaccination plant for Morocco and the African continent, he recalled, assuring that Morocco places the protection and fulfillment of its citizens in the forefront of its priorities. “Our country is currently carrying out three large-scale reforms; that of social protection, health and education to accompany, train and release the energies of our citizens throughout their lives,” he said. Noting, on the other hand, that “Morocco is working to ensure greater connectivity between our continents,” he said that the Kingdom has already built first-class infrastructure. He cited Tanger Med Port, which is now the first port of transshipment in Africa and the Mediterranean, in addition to many new projects, which, combined with existing international airports, will connect the African and European continents by air, sea, rail and road. These exchanges cannot take place without a stable and sustainable world. However, this stability is now threatened by global warming and the problems of price and energy supply,” he said, noting that thanks to the Clear Vision of HM the King, Morocco has taken its responsibilities by being a pioneer in renewable energy for over 15 years, while being in the forefront of new energy technologies, such as the development of green hydrogen. Initiated by the European Commission, this year’s EDD aims to highlight “Global Gateway”, the EU’s new strategy to invest in “smart, clean and secure” infrastructure in the digital, energy and transport sectors, and to strengthen health, education and research systems around the world, tackling inequalities and putting the Sustainable Development Goals on track. Organized in a hybrid format, EDD welcomes 2,500 face-to-face participants, in addition to 10,000 online participants. Political leaders, civil society representatives and private sector actors from all over the world participate in these European Development Days. The opening session was marked by the participation of the President of the European Commission, Ursula von der Leyen, the President of the European Council, Charles Michel, Queen Mathilde of Belgium, the UN’s MDG champion, King Letsie III of Lesotho, African heads of state and government, and officials from European institutions. For two days, participants can take part in more than 90 sessions, including high-level panels, around the five key themes of the Global Gateway: digital, climate and energy, transport, health, and education and research. There will be specific sessions on the geopolitical context and the need for sustainable financing flows, as well as region-specific sessions. In addition to the debates, the “Global Village” will allow participants to present innovative projects related to EDD themes, and to share their experiences on their initiatives.