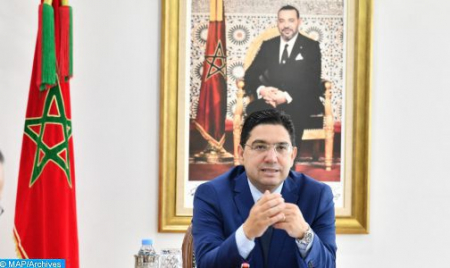 Minister of Foreign Affairs, African Cooperation and Moroccans abroad, Nasser Bourita held talks, on Wednesday in Rabat, with Belgian Federal Minister of Development Cooperation, in charge of major cities, Meryame Kitir. During this meeting, held on the sidelines of Ms. Kitir’s visit to Morocco to take part in the launch of the third phase of the Belgian-Moroccan program for the empowerment of women (Min Ajliki 3.0), the two ministers discussed ways to bolster cooperation relations between the two countries. The third phase of the Min Ajliki program, which covers the 2022-2026 period, was officially launched on Wednesday in Rabat, at the initiative of the Association for the Promotion of Education and Training Abroad (APEFE). This phase was launched at a conference held under the theme “Economic Inclusion of Women in Morocco: Challenges, Prospects and Measures.” The event was attended by the Minister of Economic Inclusion, Small Business, Employment and Skills, Younes Sekkouri. Launched in 2013 by the APEFE and financed by the Belgian Development Cooperation, “Min Ajliki” aims to act in favor of women’s employment in Morocco by improving their socio-economic integration through entrepreneurship activities or improving their employment skills in order to access the job market.